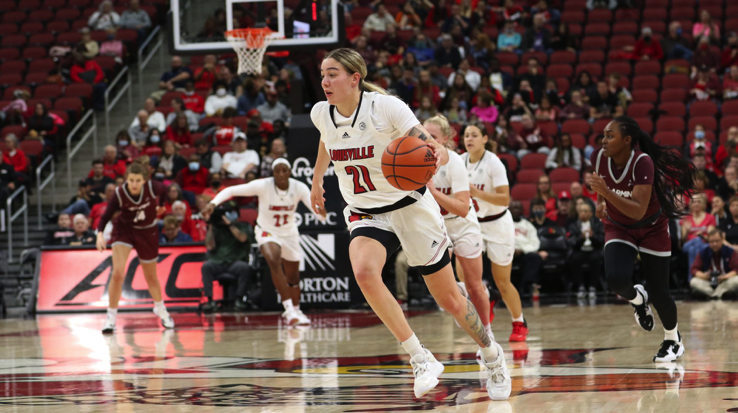 The University of Louisville women’s basketball team waltzed to an 82-25 victory over Bellarmine at the KFC Yum! Center but the score was never that close. A real snoozer but the Cardinals have a win under their collective belt.

One-sided score for sure, but not an impressive win for Jeff Walz’s team. Fortunately for him, he was able to convince Emily Engstler to transfer from Syracuse and Chelsey Hall from Vanderbilt during the off season. From this non-trained eye, they have shown a propensity for leadership during the first two games.

Engstler led all scorers with 12 points. Actually she was all-everything for Louisville in this game, also picking off 14 rebounds, four steals, three blocks and three assists in only 19 minutes. Chelsie Hall, meanwhile, had three assists, two rebounds, two steals and four points during a similar stint.

Though it was a lopsided game, some UofL players still seem to be struggling to find themselves. Hailey Van Lith will wind up being a prolific scorer but she is slow getting out of the gate. Eleven points, three rebounds, zero assists and three turnovers against Bellarmine is not going to get it done as the season progresses.

Noteworthy that Norika Konno, Ahlana Smith and Kianna Smith contributed 11, 10 and 9 points, respectively. Obvious, though, that this team is looking for some of the veterans to step up and grab the reins before much more time elapses.