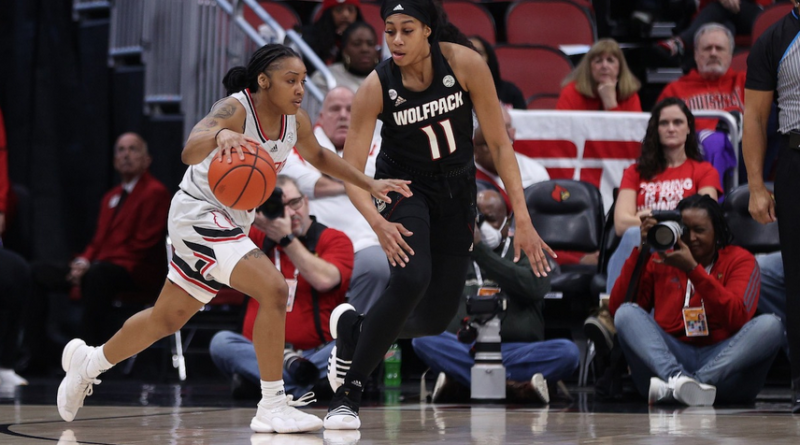 Not a good day to lose the shooting touch. The University of Louisville women’s basketball team struggling all game long. The low point, a single field goal in the fourth quarter. It didn’t matter who tried. Hailey Van Lith, Morgan Jones, Olivia Cochran.

No suspense at the horn, North Carolina State winning its fourth straight against UofL, 63-51, Sunday in front of 11,175 at the KFC Yum! Center.

When you shoot one of 15 from the field in the fourth quarter you’re probably going to lose every time. The Cards (15-7, 6-3) did that. For the game, they managed to hit on only 20 of 66 field goal attempts. NC State was a little better, hitting 23 of 50 attempts. Those last 10 minutes, however, were a deep freeze for UofL.

‘“We were just unable to score,” said Louisville coach Jeff Walz. “We made too many turnovers (four in the first quarter ) and that has been our achilles heel.” The Cards finished with 12.
Bad shooting. The Cards made 20 of 60 field goal attempts for 30 percent. Hailey Van Lith scored 11 points on four of 20 shooting and had five turnovers. When Van Lith struggles this team struggles. Her second straight game with five turnovers.

Chrislyn Carr led Louisville with 16 points but was six of 14 from the floor. Morgan Jones added 13 points and five rebounds

NC. State (15-5, 5-4) trailed big in last seasons game at Raleigh but rallied for a victory. “This one definitely stung,” said Carr. “Credit their defense but we missed some easy shots, left some easy baskets out there.”

Louisville takes to the road for its next two games Thursday at Wake Forest and Sunday at Syracuse.