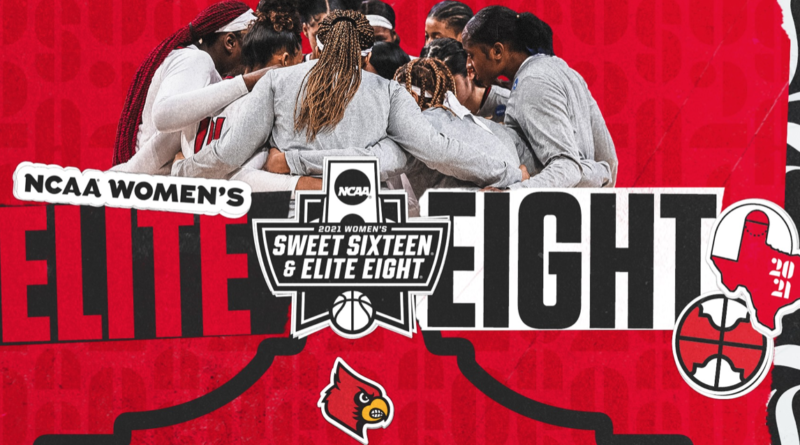 Time to come up for air, Cardinal fans. The University of Louisville women’s basketball team has advanced again, making it to the Elite Eight for the sixth time in Jeff Walz’ 14 seasons. This time running through and around a much taller Oregon team in a 60-42 rout.

Dana Evans again the primary focus of an opposing defense. Another slow start, missing all four of her shots in the opening quarter. Here we go again? Not this game. Too much at stake her team, too much on the line for UofL’s All-American guard and two-time ACC Player of the Year.

Then the switch would turn on. The 5-foot-7 senior would find her shooting touch again. Opening up with a 3-pointer early in the second quarter. Creating ways to get to the basket. Venturing back out to behind the 3-point line. Finding her teammates. She would lead all scorers with 29 points, making 11 of 21 field goal attempts, including three 3-pointers and four of six free throw attempts.

”I knew it would end at the right time, when I needed it to,” Evans said. ”My teammates didn’t need me to do what I did tonight in the other games. Everybody has been stepping up. I think everything happens for a reason. My teammates were able to get their confidence and get going and now that I feel like that I’m back to my normal self, I feel like we’re going to be just fine.”

Oregon got within 43-37 early in the fourth quarter, but seven straight points by Evans — including two deep 3-pointers — started a 13-0 run that put the game away.

Evans capped her night with a fast-break layup off a spectacular behind-the-back pass from Mykasa Robinson who stole the ball with a minute left.

There were only 11 free throws in the game, Evans with all of Louisville’s six foul shots, making four of six of them. Sedona Prince was two of two for Oregon and Nyara Sabally was two of three. The officials called 10 fouls on Oregon, seven on Louisville.

Hailey Van Lith and Robinson had seven rebounds each, and Kiana Smith five against the towering Oregon team. The Cardinals were still out rebounded by a 40-37 margin. Smith added 11 points and Van Lith had eight.

2 thoughts on “Louisville Women Back Where They Belong”