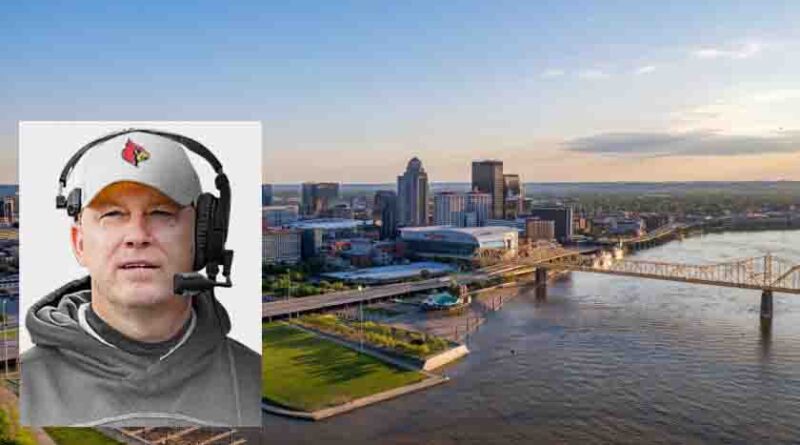 Didn’t take long for the University of Louisville’s new football coaching staff to start to try to rebuild that recruiting wall around the city of Louisville that seems to have become pretty porous over the last few years. Cardinal Head Coach Jeff Brohm and his staff are trying to make sure that the next Brian Brohm or Michael Bush don’t leave the 502 to continue their playing careers.

As originally reported by Jody Demling at Cardinal Authority, Jeff Brohm, Offensive Coordinator Brian Brohm, and Running Backs Coach Chris Barclay visited several local high schools in the area last Friday. CardGame reached out to those staffs to get a gauge on how the visits with hometown product, former NFL quarterback, Trinity alumnus and veteran head coach and his staff went. These are the responses from those that participated:

How did the meeting go? How did Coach Brohm go about trying to build/improve his relationship with you and your program?

Hunter Cantwell, Christian Academy Louisville: The meeting went great.  We’ve always had a great relationship as Jeff coached me all five years when I was a player at U of L.  Coach Brohm has been through our doors at CAL many times while he was at Purdue, and it was great to see him visit with the Cardinal Bird on his chest!

Kevin Wallace, St. Xavier: I have been fortunate to have players in Coach Brohm’s program at WKU, Purdue, and now at UofL.  It has been my experience that he and his staff will recruit the best players to give their program the highest probability of success.  The number of UofL staff members with ties to Kentucky should give them an opportunity to compete for the best players in our state.

Josh Abell, Fern Creek: It went very well. It is clear and apparent that the staff is trying to win the city over the other state school. Coach Brohm, who has always recruited this area, was very open to any and all recruits I sent him and seemed genuinely interested in our prospects.

Donnie Stoner, Manual: My meeting with Coach Brohm was natural, authentic and inviting. Coach shared his vision and plan for keeping local talent in the city and building relationships with high school coaches. He invited me over anytime I wanted to come talk ball or just hangout.

When was the last time a football coaching staff member of UofL visited you on your campus?

Cantwell: Mark Ivey was on our sidelines for our home game vs. Western Hills on October 21.

Wallace: Since I arrived at St. X in 2018, each of the UofL staff’s (Petrino, Satterfield, Brohm) have been regular visitors to our campus during the open recruiting periods.  All of the UofL coaches that have been in our building during that time have treated our staff and players in a very professional manner.

Abell: We get a visit every year, even under Satterfield. However, this visit was different because they did not show up here “just for show.” They are authentically recruiting the area.

Stoner: I personally have never seen a coach from UofL on campus. However, I had a couple coaches reach out through text but that was the gist of it.

How does this new staff’s approach differ from the previous staff with Coach Satterfield?

Cantwell: I would say that all college staffs right now across the college football landscape are getting more involved in building relationships with high schools.  Coach Satterfield always had an assistant stop by our school every year and sometimes more than once.  University of Kentucky and WKU as well, among other instate schools, send out assistants each year to keep those relationships strong. Coach (Jeff) Brohm has been the first head coach consistently through our door.

Abell: When Coach Satterfield first took the job, he was a guest speaker at the Fern Creek Chamber of Commerce luncheon. Someone asked him about recruiting locally. He only mentioned Trinity and had no idea any other school in the area existed, nor produced top talent. Remove FCHS from the equation…he never mentioned or acknowledged Male, Manual, X, CAL (where a U of L alum has coached for 10 years) or any other high school.

Stoner: I know four to five coaches on this staff personally. It feels more like a friendship with them more than anything. I trusted these guys before they got here and trust them even more now that they’re here. It’s important to know that my guys will get an opportunity at a university that sits less than five minutes away in walking distance.

Would you feel confident sending a player of yours to UofL with this staff that they would look out for said player and put them in a position to succeed?

Cantwell: Yes, I would definitely feel confident about sending a CAL football player to UofL.  I know from personal experience the type of men those guys are as well as being tremendous coaches.  I would not be the coach I am today and would not have had the opportunities in my playing career that I had without Coach Brohm’s influence and coaching in my life.

Abell: Absolutely. Its less about U of L and more about the staff. I felt the same way when Coach Jeff Brohm was at WKU and Purdue.

Stoner: Absolutely, Coach Brohm and his staff are committed to this city and what it takes to grow the program and develop local talent. There have always been guys in the city that could play at UofL and wanted to play, they were just never given a shot.

Any other comments about this staff or the previous staff you would like to make?

Cantwell: So excited to have Coach Brohm back at UofL.  I look forward to watching his continued success for years to come!

Wallace: In order to be transparent about my answers, my son, Ryan, is a part of the new UofL staff.  Ryan has worked for Coach Brohm at WKU, Purdue, and now at UofL.  The players that I have coached that have played under Coach Brohm had enjoyed their experience.  Coach Brohm has exhibited an ability to get his teams to perform at a high level and I am confident that will continue.

Abell: Excited to see how this will increase participation in the city as a whole.

Stoner: I think I can speak for all local coaches by saying “We are glad Coach Brohm is here” and look forward to building local talent.

For some coaches in the local area, there seems to be quite the paradigm shift from attitude towards their programs, availability to their staffs and just an overall renewed excitement back in the mix when it comes to football recruiting as Coach Brohm and his posse are circling the wagons to lockdown the city and get the program back on a collision course.