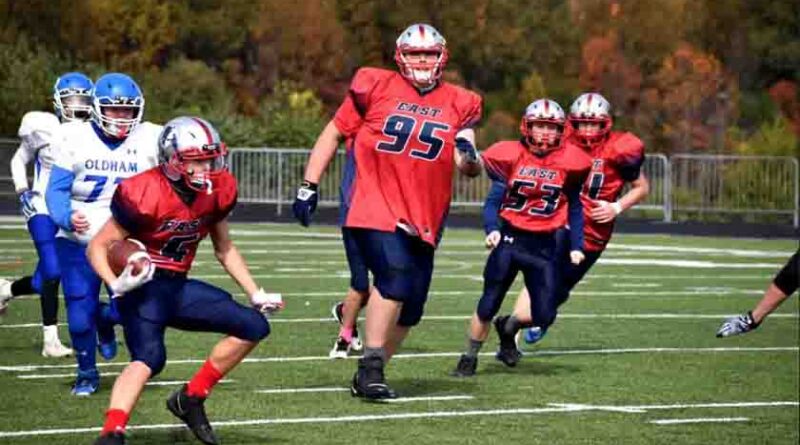 Matthew Wells has his eyes set on playing football at South Oldham High School where he will be a freshman this year. The modest 14-year-old says he will be happy just to make the team. But those who know Matthew and have followed him would not be surprised if he plays a major role during his first year.

Wells has been playing football since he started for the Mighty Mites as a six-year-old during kindergarten. Before that, catching and throwing footballs with his dad Aaron Wells in the family’s back yard. “Matthew was blessed with size and talent,” says his father. “and has won championships at every level in youth leagues, always making the all-star teams.”

No surprise, considering Matthew has always been bigger and stronger than most kids his age.  He currently stands almost 6 feet 6 and weighs in at 360 pounds. A big player with plenty of muscle to complement his massive frame, always a force on the offensive line. He led East Oldham Middle School to a 5-1 record last season, and was selected as one the league’s most outstanding players. “Running backs like to run behind me because I know what I’m doing,” he says smiling.

Matthew says he absolutely loves the game. “My goal is to play professional football or college Division I at the very least,” he proclaims. He has the full support of parents Aaron and Alicia Wells who have been there at every game along the way.

During the past week, Wells attended one-day camps at the University of Louisville and the University of Kentucky.  “My dad enrolled me in both camps to get some experience from college coaches,” he says. “We worked a lot on stances, blocking, power blocking and the fundamentals.”

Wells noted that he thought the UofL camp was the better organized camp, with more personal attention and higher energy levels but added, “It’s too early to be picking any favorite schools. I’m very excited about the prospects.”

His dad says Matthew understands the priority putting in hard work. “Losing 20 pounds over the last few months is an indication that he gets it,” he explains. “We watch what he eats, lots of high protein and low carbs. He spends lots of time in the gym and lifting weights. I just keep telling him to keep working hard to perfect his craft and good good things will happen for you.”

Dad has personally always been a UK fan but he says any college decision will be strictly up to Matthew. “We just want what’s best for him and will support him in any decision he makes,” he promises.

In this Observer’s considered opinion, Matthew will be receiving a lot of attention from opposing coaches and players, along with contacts from college coaches, as he continues his journey over the next few years. For now, however, he is focused on the next step, getting to work out with his teammates at South Oldham. “I can’t wait to get started,” he says.

One thought on “Louisville football will be watching young Matthew Wells”