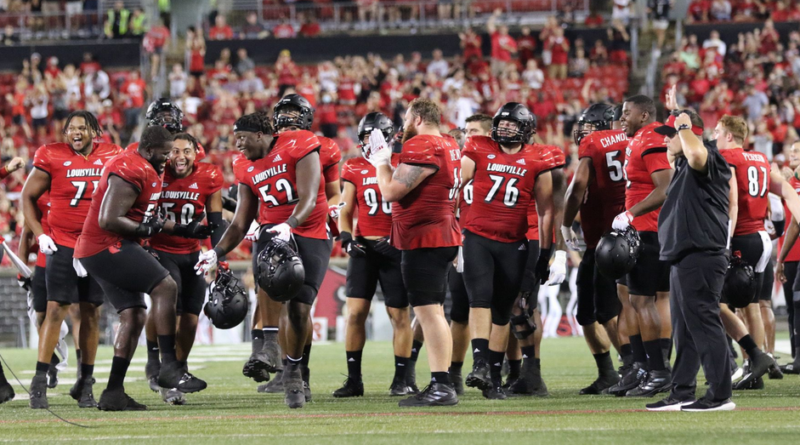 Happiness was a celebration of a last second 42-35 win over Central Florida during the 2021 season (Mike DeZarn photo).
Football
Ed Peak 2 min read

Coach Scott Satterfield tried to pull things together in his weekly press conference Tuesday. He used terms like “lack of energy” and “edge.” “Didn’t play well, give Syracuse credit,” said Satterfield. This comes after three straight wins over the Orange, a team picked last in the Atlantic Coast Conference.

“On Sunday, everybody obviously very disappointed and hurt,” said Satterfield. “You go down there (Central Florida) with no excitement, no juice, no energy, your going to get beat bad.”

That could spell trouble for a Louisville defense that didn’t tackle well. Other player makers are Johnny Richardson a bruising type runner and a fast receiver in Ryan O’Keefe. “They go fast, have a fast tempo. It’ll be a challenge for us.”

The Knights play in FBC Morgage Stadium known as the “Bounce House.” UCF is 30-2 over the last five seasons and 74-22 overall there.
“We’ve got to match their energy,” said Satterfield. “We’ve got to have something good happen early and keep their crowd out of the game. It’ll be loud. We have to match the intensity and the energy.

“You have to bring that intensity that matches whoever you are playing,” said Satterfield. “I was disappointed in that last week. Hopefully we learned last week and bring it this week.”
UCF (9-4) last season is coming off a Gasparilla a bowl win over Florida. The Knights are five point favorites.

Central Florida Coach Gus Malzahn had this to say about last season’s closing seconds loss to the Cardinals. “Everybody knows just how tough a loss that was for us with the circumstance of what happened,” said Malzahn. “We lost 7 or 8 players (injuries) during the game and we lost our quarterback on the last play of the game. A real tough deal.”

And about the Cardinals. “We know Louisville didn’t play their best this last game. But we know we’ll get their best.

“We know their quarterback is one of the top players in college football. He played really well against us last year. Their backs were a little against the wall last year when we played them.”
UCF (1-0) opened the season last Thursday with a 56-10 win over South Carolina State.