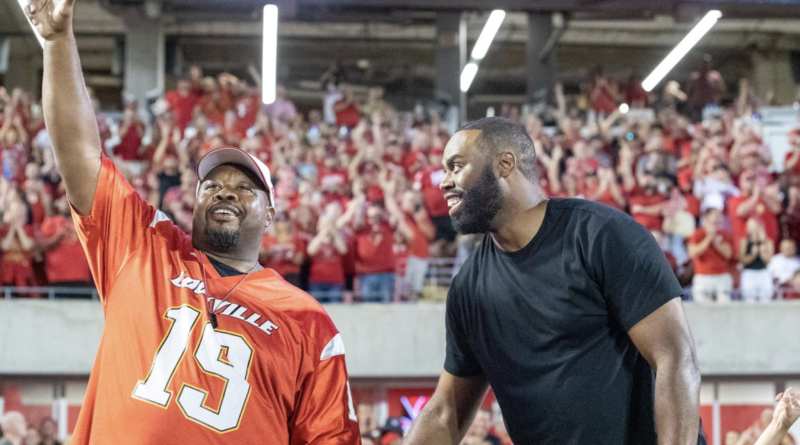 Michael Bush and his dad celebrate as the No. 19 jersey is honored at Cardinal Stadium (Mike DeZarn photo).
Football
Ed Peak 1 min read

It was a game at the University of Cincinnati during the 2004 season. Michael Bush taking the hand off from quarterback Brian Brohm. Bursting up the middle with what seemed like half of the Queen City tracking him.

The ever observant Bush looked to the huge video screen just beyond the end zone. Every time a defender made a move to stop Bush, he made a countermove. Time and time again until he got to the end zone.

The career of one of the best running backs in the Big East and University of Louisville, the one and only Michael Bush was, to put it mildly, a load for opposing defenders.

The Male High graduate, who played in the infamous 55-52 loss to Trinity and Brian Brohm in the 2002 State 6-A Championship game, was honored Friday night during UofL game against Florida State. Bush and his No. 19 will join the other Honored Cardinal jerseys on a wall at Cardinal Stadium.

Unfortunately Bush broke his leg in a season opening 59-28 win over rival Kentucky on September 3rd in 2006. That UofL team lost only one game (to Rutgers) and went on to win a BCS game in the Orange Bowl.  Had he been healthy, Louisville had the potential of fulfilling Howard Schnellenberger’s prediction of a national championship for UofL.

Bush went on to play in the National Football League for the Oakland Raiders and the Chicago Bears. His NFL statistics are 3,250 yards rushing and 29 touchdowns over six seasons. A load for anyone to handle at all levels of the sport.