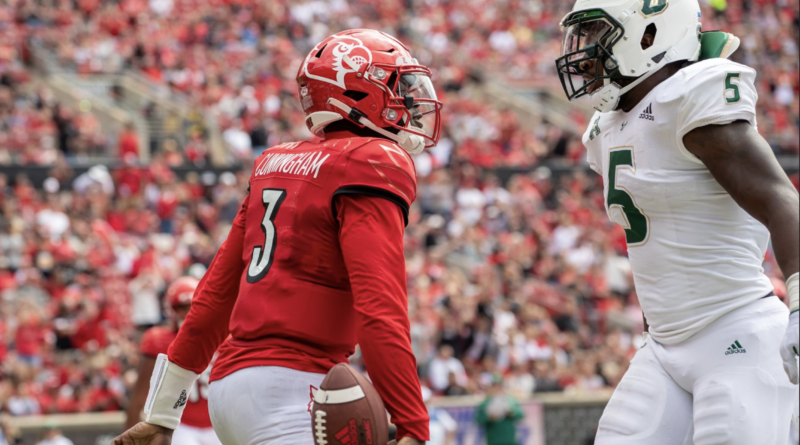 The last thing any University of Louisville football follower expected Saturday was a cakewalk win over South Florida. Wasn’t supposed to happen whether the Las Vegas odds makers had made UofL a 14-point favorite. Fans know their football team far better than a bunch of gamblers hunched over TV monitors.

Really? Maybe so, maybe not. A team that has its fans shaking their collective head after losing two of its first three games came out and shocked the fan base with a 41-3 win over the USF Bulls. Totally dominating the visitors before a crowd of 41,217 at Cardinal Stadium. Fans expecting another cliffhanger in obvious disbelief as their team racks up 542 offensively while limiting USF to a total of 158 yards.

Who are those guys? None of those pesky blocks in the back on kickoffs. Just a couple of false starts. In fact, only five penalties for 59 yards in the game. Playing with poise against a team that came within three points of going into overtime against Florida the previous weekend. A team that looked it knew what it needed to do and was capable of doing it. None of the bonehead mistakes that has plagued this team in the recent past, this season and last.

The kind of performance that makes fans suspect UofL is capable of so much more. South Florida no world beater but slouch either. The UofL beat down tempting fans to imagine what could be possible with eight games to go. Just maybe Coach Scott Satterfield knows what he’s doing. Maybe the switch came on Saturday. Farfetched but fans can hope, this lopsided win just enough to get them excited again, wondering whether something really good is about to happen with Louisville football.

UofL again relying heavily on quarterback Malik Cunningham’s abilities on broken plays, the senior rushing for three touchdowns and passing for another. Running for 113 yards while completing 14 of 22 passing attempts for 186 yards. Cunningham becoming the third player in school history with over 3,000 rushing yards in his career and only the eighth quarterback in NCAA history to eclipse 8,000 passing yards and 3,000 rushing yards in a career.

Sophomore running back Trevion Cooley returned to the backfield, churning 75 yards on 11 carries, or 5.6 yards per carry. That kind of production is needed from someone besides Cunningham.  Tiyon Evans with a touchdown, 54 yards on 13 carries, 3.9 yards per carry, Jawhar Jordan eight carries for 41 yards, 4.8 per carry.

One game does not a season save, but UofL’s performance on Saturday was a welcome reprieve from the norm.

Cardinal fans also got their first look at backup quarterback Brock Dormann, a junior transfer from San Bernadino Junior College in California. A quarterback with a light touch and confidence in handling the ball, completing five of eight passing attempts for 85 yards.

Getting his feet wet, getting acquainted firsthand with the offense, comfortable in his debut calling UofL’s signals. Seems to be a natural, with what one analyst described as pinpoint accuracy.

Good to know there’s some talent and depth at the quarterback position. Just in case.