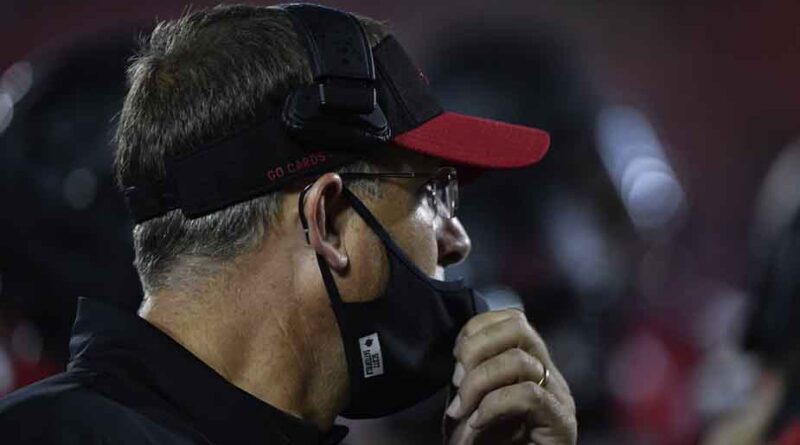 Football coaches don’t like to look ahead. They are laser focused on the upcoming opponent. Florida State is that opponent this week as the University of Louisville opens the home portion of its season Friday night.

The consensus on Twitter seems to be that it’s the biggest game in Coach Scott Satterfield’s four seasons here. If the Cardinals (1-1) could get the victory they would be favored in possibly the next three games. South Florida (1-1) , at Boston College (0-2), at Virginia (1-1).

“We’re excited about this opportunity,” said Satterfield during this week’s news conference. “We haven’t been here it feels like in a long time and we’re glad to be playing here in a normal week as far as time goes and not having s short week.”

Last Friday’s win at Central Florida was big. The Louisville defense shut out the Knights in the second half. Now if the Cardinals could get on a run. It won’t be easy.

Satterfield is impressed with the Seminoles. “They had a great first two games,” he said. “Jordan Travis (quarterback) is playing very poised and throwing the ball good. They have some excellent running backs. Their offensive line seems better. They got physical players out there and defensively they’ve got some experience back.”

The Louisville offense has sputtered at best in two games scoring 27 points. That can’t continue. Malik Cunningham has to produce more. The running game needs to get stronger and the passing game more accurate.

“Malik has to throw the ball better,” said Satterfield. “There’s no question we could have extended some drives the other night if he hits (some passes). He was excellent in the run game, did a great job with that and had some big plays.”

Satterield said he wants to get the ball to the receivers Marshon Ford, Amari Huggins-Bruce, Tyler Hudson and Dee Higgins.
Cunningham is 30-52-2 in passing for 347 yards. Hudson has 11 receptions while Ford has five catches and Huggins-Bruce four.
The running backs have done a good job as Tyron Evans averages 82 yards a game and Cunningham 77. With Florida State’s size on the defensive line it might be difficult to run.

“They played great the first two games,” said Satterfield about Florida State. “I think Jordan Travis is playing very poised and throwing the ball good. They have excellent running backs and their offensive line seems to be better. They are really big.”
Travis has competed 64.2 percent of his passes and two two touchdowns.The defense is big and fast with Tatum Bethune and Kalen DeLoach and Jared Verse and Jermaine Johnson came from Georgia last year and ended up ACC Defensive Player of the Year. “They are big and they can run,” said Satterfield.

Florida State coach Mike Norvell had nothing but good things to say about Cunningham.“He’s such a electric player. He’s got a great arm. He pushes the ball down field and very accurate in the vertical passing game,” said Norvell. “What he does with his few people out there than can do that. He’s played so much. He’s tough, at times he takes a lot of contact, he pops right up. Very dynamic football player. “

Former Cardinal Michael Bush from Louisville Male High will be honored. Bush was on the 2006 Orange Bowl winning team. Bush suffered a leg injury in the season opener against Kentucky. He played for the Oakland Raiders and Chicago Bears in the NFL.