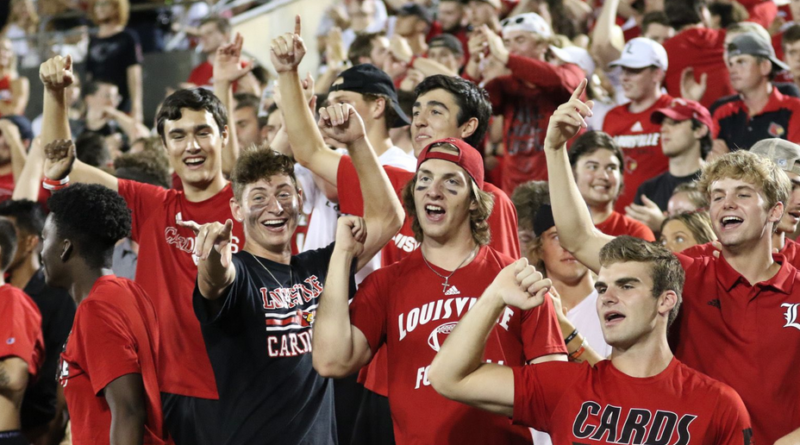 Kickoff is at 3 p.m. at Cardinal Stadium. Be there or be square (Mike DeZarn photo).
Football
Ed Peak 2 min read

In three of the last four games, the University of Louisville football team has faced one of the nation’s top quarterbacks. Here comes another one. Virginia has its own outstanding signal caller in Brennan Armstrong.

The Cardinals (3-2, 1-1) return home for the first time since September 17 after two Atlantic Coast Conference road games to play the Cavaliers (3-2, 1-2) Saturday at 3 p.m.
Armstrong, a junior, is averaging 398 yards passing per game, second in the nation.  He has thrown 14 touchdowns and is completing 66.7 percent of his passes. He has also run for seven scores and averages 28.9 yards a game running the football.

“We have a great opponent this week in Virginia,” said Louisville coach Scott Satterfield. “Their quarterback is playing at a high level. He throws a very catchable ball … very accurate. He’s got some guys that can catch it.”

Dontayvion Wicks, who has caught five touchdown passes, 6-foot-7 Jelani Woods, with four, and Billy Kemp, with three,  are the leading receivers.
In a 59-39 loss to North Carolina, Armstrong had a career game with 554 yards passing (39-54-1) and four touchdowns.

Last Thursday, in a 31-28 win at Miami, Fla. the Cavaliers used its running game to edge the Canes. UVA rushed the ball for 181 yards and the Canes missed a winning field goal as time expired.

The Cards are a 2 1/2 favorite counter with the ever improving junior quarterback Malik Cunningham. He ran for two touchdowns and threw for two others in last Saturday’s 37-34 loss to Wake Forest. “I would put him (Cunningham) at the top of the dangerous scale,” said Virginia Coach Bronco Mendenhall. “He can pull it down and run with it at any given time. He’s a threat. His throwing has improved.”

Cunningham is second in the nation with 10 rushing to touchdowns while passing he is connecting on 63.8 percent of his throws. He has seven passing touchdowns.
He has thrown to 12 different receivers with sophomore Jordan Watkins and true freshman Ahmari Huggins-Bruce the leading targets.

Virginia brings an offense that is ranked seventh nationally, averaging 526.2 yards per game and is second in passing with an average of 398.0 yards per game.

“This week is a different challenge really, because these guys throw the football all over the place,” said Satterfield. “They do some good things offensively and they’re putting up a lot of big numbers.”