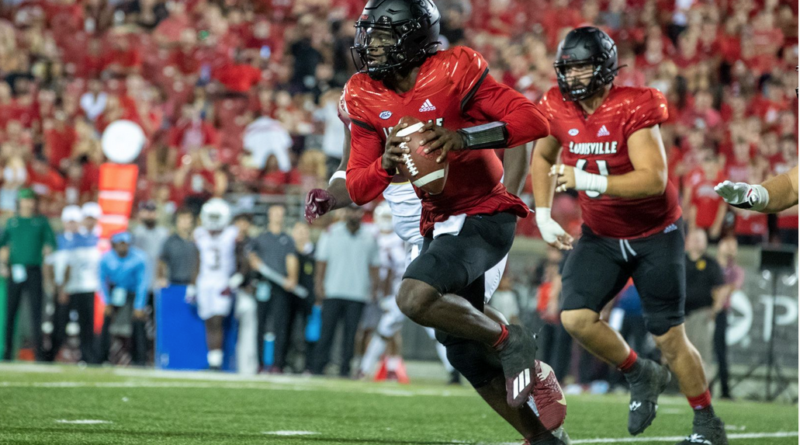 Will he or won't he? Malik Cunningham deciding to pass or run (Mike DeZarn photo).
Football
Ed Peak 2 min read

Jeff Hafley must have nightmares about trying to defend University of Louisville quarterback Malik Cunningham. Hafley, the Boston College football coach, made that abundantly clear in his weekly news conference.

“We’ve got a three year study on him scrambling and you don’t want to watch it,” said Hafley who is preparing his 1-3 Eagles to play the Cardinals (2-2) at Chestnut Hill, Saturday at noon. “He’s one of the best quarterbacks in the country, if not the best.”

Cunningham has twice rushed for 133 yards against the Eagles. In a 28-14 Louisville win last season he scored three touchdowns. “That quarterback makes them go. You can have everything perfect, then all of the sudden. Man.”

In a Boston College 34-27 win in 2020, Cunningham threw for 233 yards in addition to his running the ball.
Both teams are playing for their first Atlantic Coast Conference win of the season. The Eagles are coming off a 44-14 thumping at Florida State. “We have to put that game behind us. We better,” said Hafley.

The Eagles have a penchant for forcing Louisville into turnovers. Last season BC forced two fumbles and intercepted Cunningham twice. “Obviously a challenge to go back on the road and try to get an ACC win,” said Satterfield. “It comes back to us, focus on what we can control which is how we prepare.”

The Louisville Sports Information Office has issued a complete page of accomplishments for Cunningham. The fifth year senior has 16 categories that he is about to close in on in the Louisville record back.

While the offense gets a lot of credit the defense has been solid most of the season. Against South Florida the Cards held the Bulls to a total of 158 yards. Louisville is 11th in the country and leads the ACC in sacs with 3.3 per game. “We’ve put more pressure on teams this year which I think is awesome. We try to knock them off the sticks and create those third and long situations,” said Sattefield.

Louisville is 8-6 versus the Eagles all-time and 2-5 at Alumni Stadium. Lamar Jackson led Louisville to a 52-6 win in 2016 at Chestnut Hill.

Defensive end Ashton Gillette who missed the South Florida game with an undisclosed injury will return this week. Running back Jalen Mitchell will not.

Senior Braden Smith is enmeshed in an assault case, which is scheduled for court on October 15. He will make the trip and play at BC.

One thought on “Boston College nightmares about Malik Cunningham”