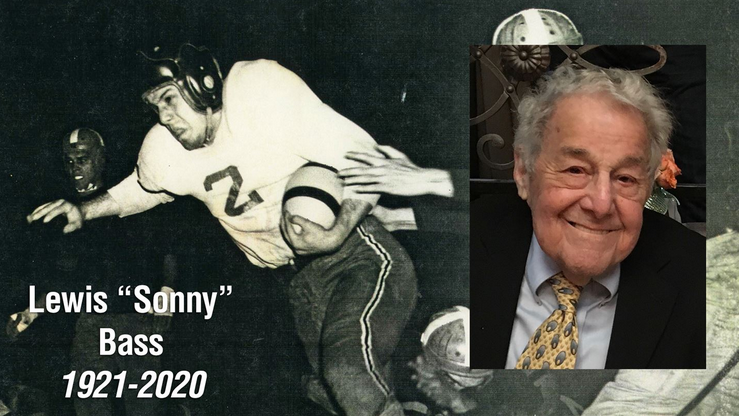 The name of Sonny Bass is indelibly linked to the University of Louisville. He’s gone now, one of the latest victims of Covid-19. Saying goodbye to Gladys, his wife of 76 years, via Facetime at Baptist Hospital.

Sonny was one of those people in a position to give generously to UofL during his 99-year life span. Supporting the University in ways to which one could aspire if acquiring the means. He launched the local real estate company Bass & Weisberg after serving in the Air Force for three years in World War II. He was also a co-founder of healthcare giant Humana.

Bass was an early supporter of building Cardinal Park on campus at a time when Floyd Street was largely a musty maze of fading industrial structures and chain link fences. In the mid-Eighties, he enthusiastically supported Bill Olsen’s concept of athletic complex. That park today includes the basketball practice center, the softball park, the women’s lacrosse, soccer, field hockey stadiums, and the women’s volleyball arena, as well as the track and field facilities.

His pride and joy was sharing the name of the Bass-Rudd Tennis Center in the park with his good friend Mason Rudd. He was a multiple athlete at UofL, starring in football, basketball and tennis in the early Forties. He was a frequent spectator at tennis matches and rarely ever missed at basketball or football game, even in his later years.

A favorite photo spot for campus visitors is the bronze Cardinal Bird statue adjacent to the Student Activity Center. The statue, of course, was donated by Bass. He also made a major donation in 2008 for the Bass Family Scholar House on Hill Street for needy UofL students with children.  He and his wife Gladys enjoyed hosting UofL basketball and football players at their home for many years.

Bass, along with the late Owsley B. Frazier, Tommy Carroll and Norm Iler, was also one of the founders of the old University of Louisville Associates (ULA) booster club. The group was a driving force in the efforts to make UofL a contender at the highest levels of collegiate sports. He also served on the UofL Board of Trustees and was a recipient of the Hickman-Camp Award for his support of Louisville athletics.

A name always near the top of list for UofL athletic directors Dave Hart, Bill Olsen, Tom Jurich and Vince Tyra. Always there when UofL needed him.

One thought on “Louisville bids farewell to Sonny Bass”