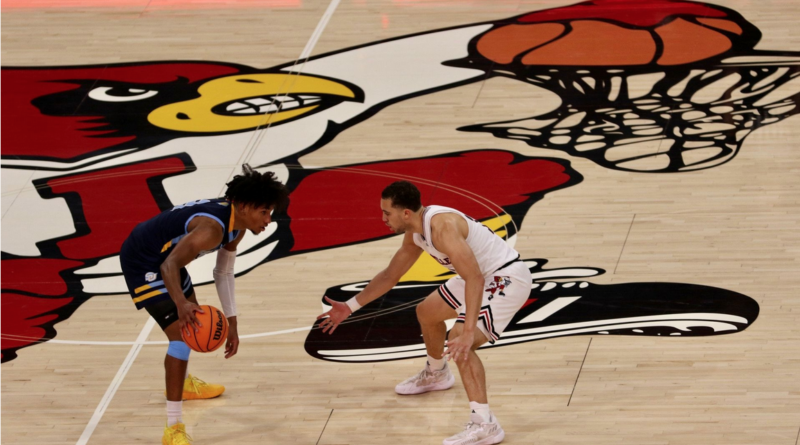 Beating Southern University took a while for the University of Louisville basketball team, and it’s obviously going to take a while for the Cardinals to reach their full potential. Maybe a lot longer. UofL opened the season with a 72-60 win before 12,643 at the KFC Yum! Center.

Coach Chris Mack was not there, of course, because of the Dino Gaudio mess. Assistant Coach Mike Pegues was in charge.

The Cardinals struggled, leading only 33-31 at halftime. Limping along with a thin 36-34 lead midway through the second half before going on a 22-7 run that gave the home team a comfortable 56-43 lead with 7:50 to play.

The reason for the burst was Miami, Florida transfer Matt Cross. “I thought he brought a lot of energy at both ends of the floor,” said Pegues. Cross finished with 15 points, five rebounds, one assist and one blocked shot. He did have four turnovers. He dislocated a finger in the second half, went to the dressing room and had it adjusted. “I knew he would come back,” said forward Samuel Williamson. “He’s one tough dude.”

Shooting and turnovers were problems. Field goal shooting, 41.5 percent, gave up 15 offensive rebounds and had 19 turnovers. I know this was only the third game that this group has played together. But things must change if this team wants to be a factor in the Atlantic Coast Conference.

“If coach Mack we’re here he’d be saying….we gave up 15 offensive rebounds and had 19 turnovers,” said forward Samuel Williamson. “We were weak with the ball tonight. We just weren’t strong with the ball.”

The Cardinals have a couple days of practice to get things ironed out before Furman visits Friday night at 7.

The ACC didn’t have a great opening night. The biggest surprise was Navy beating 25th ranked Virginia 66-58 at Charlottesville. The Citadel won at Pitt, 78-63, and Miami, Ohio won at Georgia Tech, 72-69.

One thought on “Louisville basketball winces, but subdues Southern”