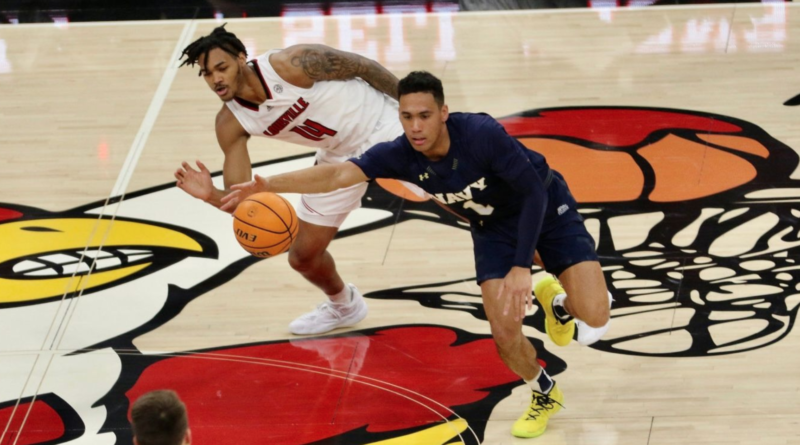 No way the University of Louisville basketball team wasn’t going to be prepared for Navy. Not after the Midshipmen had upset Virginia by eight points on Virginia’s home court on Friday. Not after UofL had suffered an embarrassing eight-point loss to Furman on Saturday.

Acting Coach Mike Pegues would have his team’s full attention going into this one. The Cardinals would respond with a more cohesive and purposeful approach to the game, both on offense and defense. Playing at faster face, looking for teammates, working for open shots on offense. Bulk, girth and speed on defense. Looking like a team with some promising potential in a 77-60 win at the KFC Yum! Center.

An impressive effort overall, with UofL displaying a welcomed ability to push a lesser opponent around on defense while also displaying some muscle and versatility around the basket. Coach Chris Mack, suspended through the first six games, won’t get to put his personal touch on this team until after Nov. 27.

A nice surprise coming off the bench providing the knockout punch. Matt Cross, a 6-foot-7 sophomore forward transfer, hitting two consecutive 3-pointers shortly midway in the first half. Stretching UofL’s lead from 18-10 to 24-10 at the 11:24 mark, followed a minute later by a Malik William’s 3-pointer to put the Cardinals ahead 29-15.

Cross would hit on all four of his four 3-point attempts and two of three free throws to lead all scorers with 14 points. He would see only 15 minutes of playing time after collecting three quick fouls, including a technical, during five minutes on the floor in the first half.