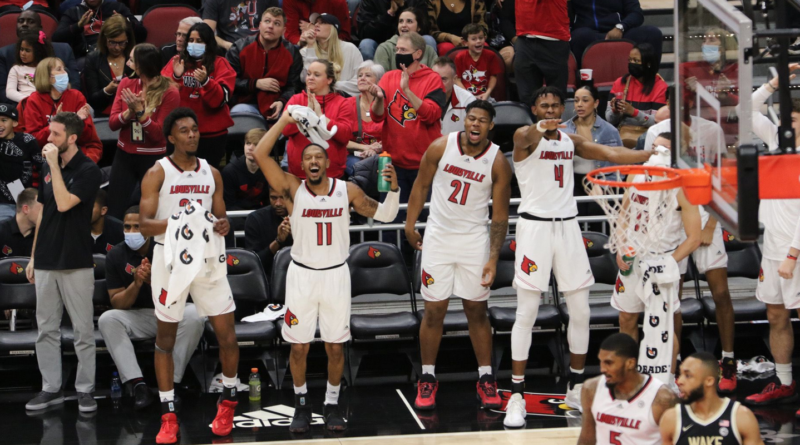 The sight of a celebrating Louisville basketball bench is one to be celebrated this season (Mike DeZarn photo).
Basketball
Charlie Springer 1 min read

Been a while since Wake Forest University has been respectable in college basketball. Even so the Demon Deacons had to be taken seriously when they arrived at the KFC Yum! Center with an 11-1 record Wednesday at the KFC Yum! Center. One had to wonder, however, if the University of Louisville was up to the task coming off an 11-day Covid pause and an embarrassing loss at Western Kentucky.

Those fears prove to be not viable on this occasion. UofL basketball, trailing most of the game, would refuse to wilt. Posting a 73-69 win before 14,120 fan to win their second Atlantic Coast Conference game. Yes, they are 2-0 now in league competition, standing atop the ACC standings. Impressive win even though Wake Forest was coming off a similar layoff because of the unrelenting virus.

The Cardinals trailed by as many as nine points in the second half before fouls would take their toll on the Demon Deacons. The visitors had four players with four fouls each at the end, including Alondes Williams who seemed otherwise unstoppable at times.  He would wind up with 15 points, seven assists and four rebounds.

During the stretch drive, however, Noah Locke, the transfer from Florida, would find his long-lost shooing touch again, scoring 14 of his game-leading 17 points in the second half. On eof those a-star-is-born performances, with Locke hitting on five of seven 3-point attempts.

An additional bonus was an exemplary performance from the oft-criticized and underperforming Samuell Williamson. One his better games ever, Williamson contributing 11 points on a couple of prize-winning dunks and an amazing for him eight rebounds. Mason Faukener adding 11 points as well.

Wake Forest is a good team, will be a better team, but Louisville was the better one in this contest.