Athlon Magazine, which features Peyton Siva on this season’s cover, picked the University of Louisville basketball team to finish 10th in the Big East Conference and to do no better than the National Invitation Tournament during the upcoming season. 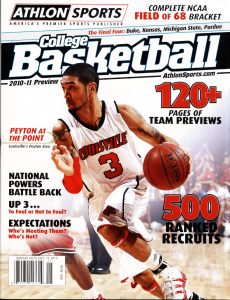 But that was before the following occurred, in no particular order:

One has to wonder how much confidence the Athlon scribes would have today in their original predictions.