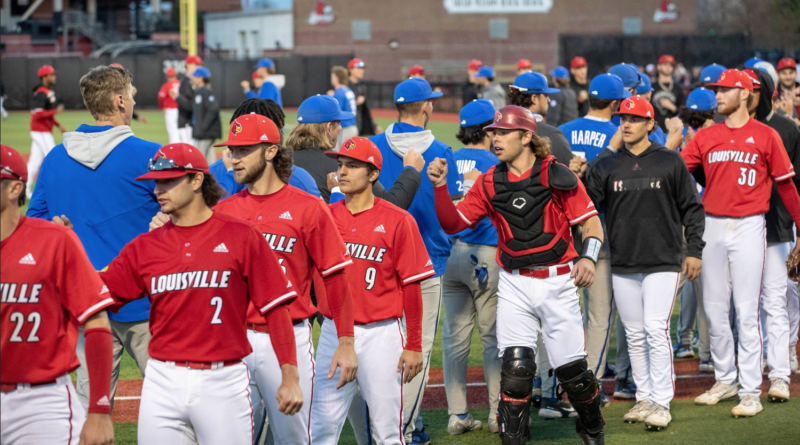 Almost, but not quite, ideal baseball weather with the temperatures hovering around the 50-degree mark. No problem for the crowd of mostly Louisvillians with the University of Louisville baseball team topping Kentucky 4-2 in front of 3,615 fans at Jim Patterson Stadium.

A relatively cordial atmosphere, with few hints of any animosity in the rivalry. Or maybe it just too cold for people to be getting to excited. Could it be that the rivalry is cooling down a bit, just another game after so many years?  The Observer is not clueless.

Cameron Masterman getting UofL back on the right track, sending a 1-2 pitch 400 feet over the centerfield wall.  He had gone hitless during Louisville’s three-game winless series against Florida State at Tallahassee last weekend. His 13th home run breaking the early game suspense, providing the Cardinals some much-needed momentum.

Righthander Kyle Walter, a freshman from Shorewood, Illinois, would set the tone on the mound, holding the Wildcats hitless on the mound in the first inning. The first of eight pitchers, he would get credit for his second win against no losses. Carson Liggett, Tate Kuehner, Ryan Hawks and Kaleb Corbett each had scoreless appearances as well.

The Cardinals managed just four hits on night, matching a season-low, but timely hitting proved to be the difference. They took advantage of some free bases in the third inning, with a pair of walks and a hit by pitch to load the bases with two away. Jack Payton then delivered a two-run single on the first pitch he saw to give the Cards a 3-0 advantage.

Kentucky (21-16) finally broke through in the sixth, but the Cardinals limited the damage to just one run. Two walks and a single put a runner at every base with nobody out, but Ryan Hawks picked up a pair of strikeouts sandwiched around a sacrifice fly to keep Louisville in front.

Louisville returns to conference play this weekend with a three-game set against No. 23 North Carolina State, starting Friday at 8 p.m. at Jim Patterson Stadium.