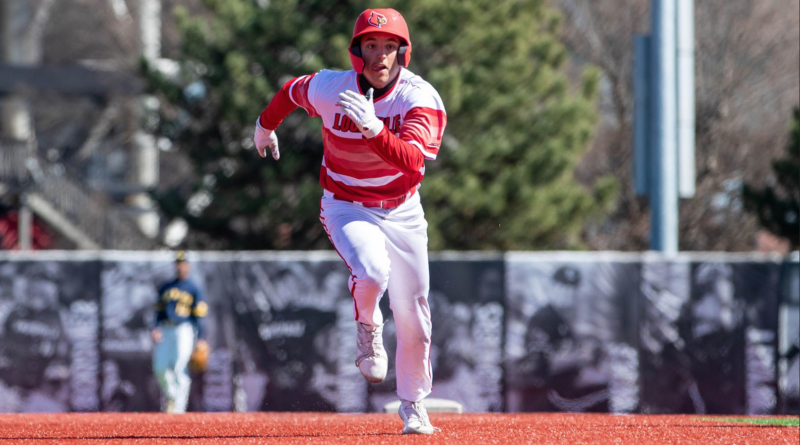 Good times for University of Louisville baseball, with the Cardinals defeating Michigan in two out of three games over the weekend. Earlier in the week, the Cardinals knocked off  No. 15 Texas Christian University.

One will just have to overlook the Friday afternoon game, which was played in blizzard-like conditions. Michigan won that one 16-7 in a game that should have stopped midway through the top of the third inning. Pitchers unable to get their footing on a slippery mound, infielders and outfielder unable to see the ball. Louisville going through five pitchers and Michigan going through the lineup twice for 10 runs before the inning mercifully ended. Game was finally stopped and was resumed on Sunday.

Back in more normal conditions on Sunday, UofL’s Riley Phillips chalking up his second win without a loss in a 13-1 win over the Wolverines. The 6-foot-4, 195-pound left hander from Alton, Illinois striking out nine batters and giving up only three hits during six innings on the mound. Meanwhile, Ben Metzinger was hitting two home runs and driving in four runners.

On Tuesday, UofL had built a 9-0 lead over TCU before senior right-hander Jared Poland had to leave the mound after the sixth inning. Louisville would go through seven relievers before Mike Prosecky, a 6-foot-3 lefty from Westchester, Illinois, put the clamps on the Horned Frogs in the top of the ninth inning.

Senior outfielder Levi Usher was named the Atlantic Coast Conference Player of the Week, the first Cardinal win the honor since Cameron Masterman during the opening week of the 2021 season. The Fairfax, Iowa, native had a standout week helping Louisville to a midweek victory over No. 15 TCU and then the series win against Michigan.

Usher was 9-for-15 in the four games, tallying two doubles, a triple, a home run, eight RBIs and was a perfect 6-for-6 in stolen bases.

He opened the week with a two-for three day, scoring twice and driving in two in the win over TCU. He then recorded his first three-hit game of the season, doubling twice in the series opener against Michigan. After a 1-for-3 game in the middle contest of the series, Usher turned in a second three-hit day, going three-for-five in the finale, with four runs batted in.