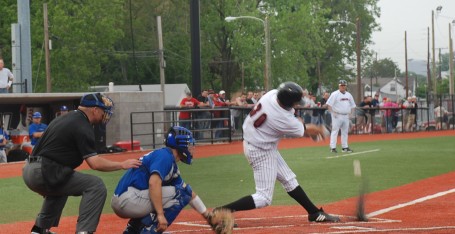 University of Louisville shortstop Adam Duvall bounces a pitch off home plate during the eighth inning of Friday’s baseball game against Seton Hall. Not the best day for Duvall who was hitless in four at-bats. U of L won, 4-2.

Better be ready Frank Esposito, Seton Hall catcher.Â  He’s barreling down on you from third base.Â  Hold on to that ball. Got it. Here he comes.

Boom. Where’d the ball go? Oh, there it is, over there. Runner safe.

Clark had led off the eighth inning with the score tied 2-2. A towering blast to right center, putting him on third base with his second triple of the season.

He headed for home plate while Ryan Wright was arriving at first base on a fielder’s choice. Clearly beaten by the ball, Clark had no choice but to go full force. Esposito was examined by the team trainer for several minutes, and left the game after the inning was over.

Louisville would go on to win 4-2, notching its seventh consecutive win, improving its record to 31-6 overall and 10-4 in the Big East.

Clark had doubled in the fourth, crossing the plate after a Wright single.

The Louisville first baseman is the leading hitter on the team, with a hefty .388 batting average. Opposing pitchers — and catchers — hate to see him coming coming their way.