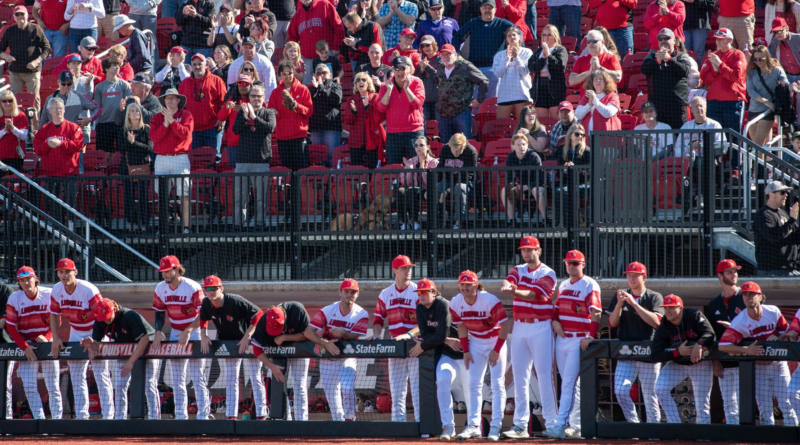 Any questions about University of Louisville baseball being back on the right track? Just ask Notre Dame, which was ranked No. 1 in the nation coming into last week’s series against the Cardinals.

UofL swept the three-game series with the visiting Fighting Irish by scores of 16-11, 8-1 and 7-5, with a crowd of 3,133 on hand for the finale on Sunday at Jim Patterson Stadium. Louisville is ranked 19th in this week’s Perfect Game standings this week, with Notre Dame falling to ninth. Coach Dan McDonnell’s team is 3-0 in the Atlantic Coast Conference play and 16-4 overall.

The Cardinals came from behind in the final game on eighth inning three-run home run by Isaac Humphrey, a sophomore from Owensboro High School.  It was the third home run of the season for Humphrey, who is currently batting 283, including eight extra base hits, 15 runs and 15 runs batted in

The Cardinals headed into the bottom of the eighth trailing 5-4 in a game that had gone back and forth. Jack Payton started Louisville’s rally with a one-out single into right center and a walk to Levi Usher put two runners on. Following a strikeout, a balk moved both runners into scoring position for Humphrey who clobbered the first pitch he saw into the trees beyond the right field wall to put the Cards in front.

Lefthander Michael Prosecky entered the game in the ninth and slammed the door on the Fighting Irish. Kyle Walter (1-0) pitched a scoreless eighth inning to secure his first collegiate victory.