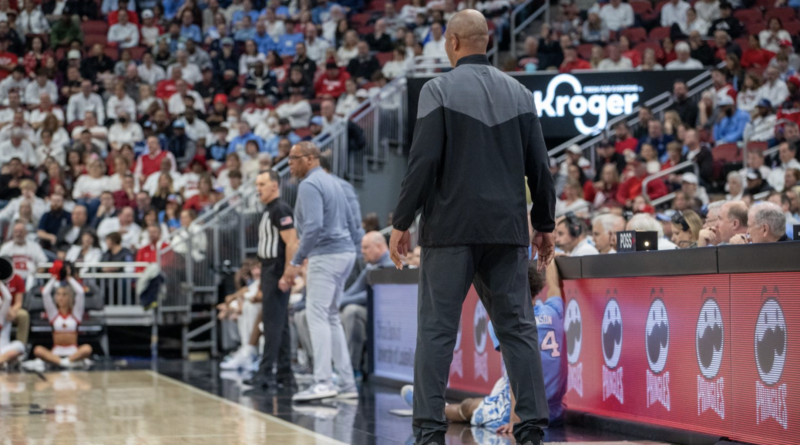 The post game radio show was the same for University of Louisville fans leaving the KFC Yum! Center on the way home after the Cardinals’ 80-59 loss to North Carolina on Saturday.

The point is the Cardinal fan base is tired of all this. Tired of Payne talking about “what it means to wear the Louisville uniform.” Adding that “several players weren’t ready to play.”

Like most Louisville (2-16, 0-7) games the Cards play about 10 competitive minutes. Then adversity hits and the Cardinals crumble. Easy to see it coming. El Ellis running over a teammate, recovering only to throw the ball to a North Carolina defender who drives the floor for an open layup.

On Friday, Athletic Director Josh Heird had praised Payne for pushing forward, continuing to grind. Payne reminded the media he’s not given up. “These are good kids. They make mistakes but I still love them,” said Payne. “We can’t have guys at minus 21, minus 20,” referring to a measuring stat on the official box score.

It seems this team is short on talent. Short on basketball smarts. Short on effort. Payne reiterated that UofL is a special place. It was once but it is becoming harder to remember the glory days.

The players on most college rosters today are interested in NIL and how quick can you get me to the NBA. Well that’s good and fine. BUT. College basketball has long been the training grounds for the pros. One can’t blame a player for wanting to advance to the next level. That’s what college is all about. Preparing you for the “Real World.”

I never imagined a Louisville basketball team would sink this low. I think El Ellis cares. Mike James is playing better. J.J. Traynor hustles. The rest of the roster spins a lot of time standing and watching who they are supposed to be guarding dribble right past them for easy shots. At times it appears players aren’t interested in playing defense or at all for that matter.

UofL shot 37 percent from the field. That included one of 14 three point attempts. The shot clock runs under five seconds way too much. Ellis led the Cards with 22 points and four assists. Ellis needed 16 shots to get those points.

Payne has got to find a way to win at least a couple more games. Time is running out. The fans aren’t happy. No one is happy
North Carolina toyed with Cardinals for about 10 minutes in a “White Out”game.

The Cardinals started the game with good intentions. Energy, drive and emotion. The problem is it doesn’t last. Louisville led 15-9. North Carolina went on a 15-4 run after that aforementioned Ellis turnover.

Louisville was within 29-26 but the TarHeels scored the final eight points of the half and led 37-26.

The chances of the Cards making a rally in the second half felt like a million to one. That is upsetting.

One thought on “Losing a way of life for UofL basketball, Kenny Payne”