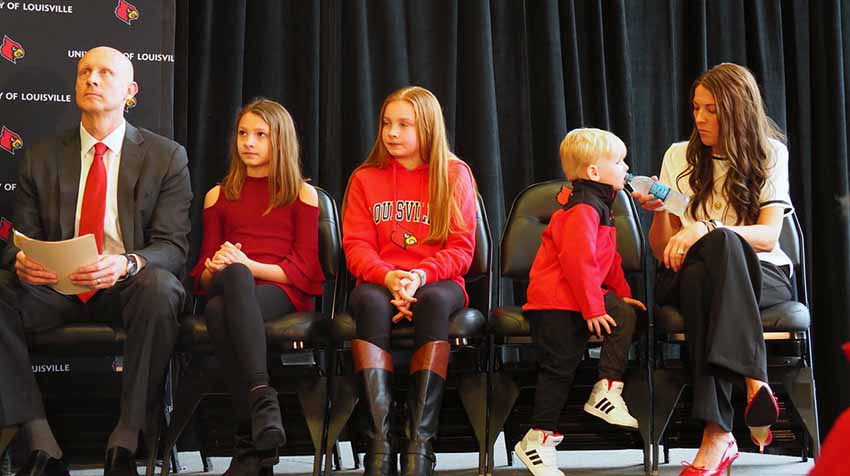 All the flack endured by the University of Louisville over the past couple of years was unfortunate but none of the issues did anything to dampen Chris Mack’s admiration of the UofL basketball program. His respect was such that he would leave his hometown and give up a nine-year coaching stint at his alma mater to take charge at Louisville.

“This is an awesome and exciting day for me and my family, the opportunity of a lifetime,” he told the crowd of approximately 350 people at his introductory press conference at the KFC Yum! Center. “Standing here before you representing a school that has had two permanent basketball coaches since 1971., two hall of fame coaches, multiple final fours, multiple national championships, and multiple All-Americans … ”

The new UofL coach was accompanied on the stage by his wife Christi, his daughters, Hailee, 11, and Lainee (12). His 3-year-old son Brayden also was there but not long, wandering the back of the meeting room where he was heavily pre-occupied with  Play Doh.

If Mack sounded like someone living the dream, it was because he has long admired UofL basketball. “I told the UofL players it was not easy to leave a situation in which less than 24 hours ago I was in another locker room with another group of players with a lot of tears,” he said. “To leave Xavier to come here, this place had to be pretty special. And it is, very special.”

Sharing his enthusiasm is his wife, the former Christi Hester, who grew up in the Louisville area. She was runner-up for Miss Kentucky Basketball as a senior at Holy Cross High School in 1996.  Runner-up to Jaime Richey, the sister of Jeff Walz, who coaches the UofL women’s basketball team.

During his nine-year tenure at Xavier University, Mack was considered a candidate for some other major coaching jobs, but chose not to leave. “Some people say, ‘Why go there (to Louisville?). He’s crazy’. I have never been afraid of a challenge. I faced a lot of adversity during my playing years (including ACL injuries in both knees).  It was a tough decision but in my heart I knew it was the right decision.”

Mack said it was not his job to look backwards but to look forward.  “I told these guys (the UofL players) that this is my final stop,” he said. “I’m never going to coach at another university, not in the NBA, or in high school. I can’t wait to get started.”