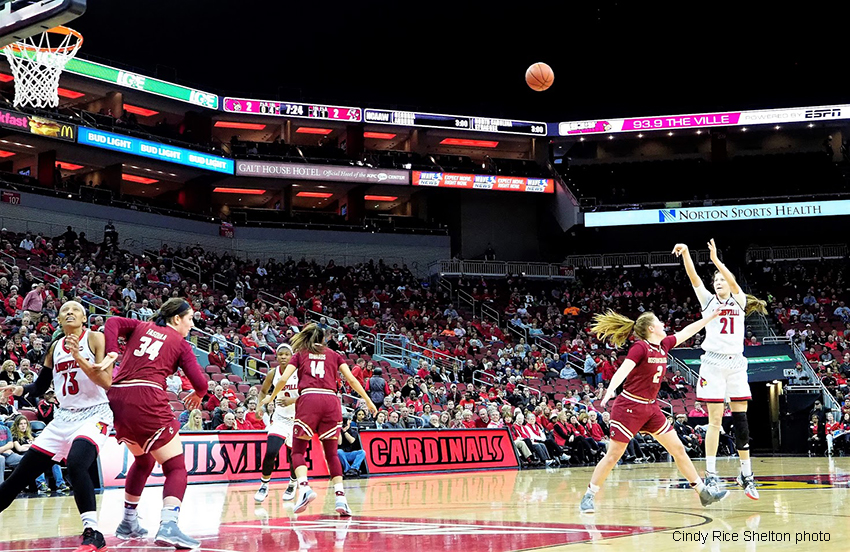 Apparently when Jeff Walz sends a message to a University of Louisville player, he wants to make sure the individual has time to consider the desired result. Just ask Kylee Shook who was benched quickly in the second half against Virginia Tech on Thursday.

So surprised when she had a wide open path to the basket, Kylee did an awkward ball fake, was called for traveling, and summoned to the bench. Done for the night, having to think about it the rest of the night and over the next three days.

Imagine her relief, then, when Walz tapped Shook as the starting forward the following Sunday. The coach appealing to her competitive edge, hoping she would react in a positive way, needing her to be a leader.

Shook would do just that, the young 6-foot-4 freshman responding with one of the best games in her career in a 68-43 win over Boston College before 9,306 fans at the KFC Yum! Center. She would make six of 10 field goal attempts, including two of three 3-point shots, to lead all scorers with 14 points while pulling down five rebounds.

No mishaps in this one, either, Shook with zero turnovers in 20 minutes of playing time.

Before one gets carried away, however, it should be noted that Shook may have gotten the starting opportunity because Asia Durr, UofL’s leading scorer, was the one on the bench in this game.

All game long, with no explanation except for a “coach’s decision.” Nobody close to the team knowing anything, saying nothing, not even her. As Durr was leaving the floor, an elderly woman called out to her, “Hey, Asia, what did you do?”

Also of note, Mariya Moore did not return for the second half after making three turnovers and missing all six of her field goal attempts in the first 20 minutes.

More messaging? Or was it because she wasn’t needed? Myisha Hines-Allen, who had 10 points and 13 rebounds, saw only eight minutes in the second half. Regardless, they will have all week to think about it, UofL not playing until next Sunday when North Carolina arrives for a Noon tipoff.

A long week ahead, plenty of time to let any object lessons sink in.

One thought on “Kylee Shook gets message, UofL women skate past Boston College”