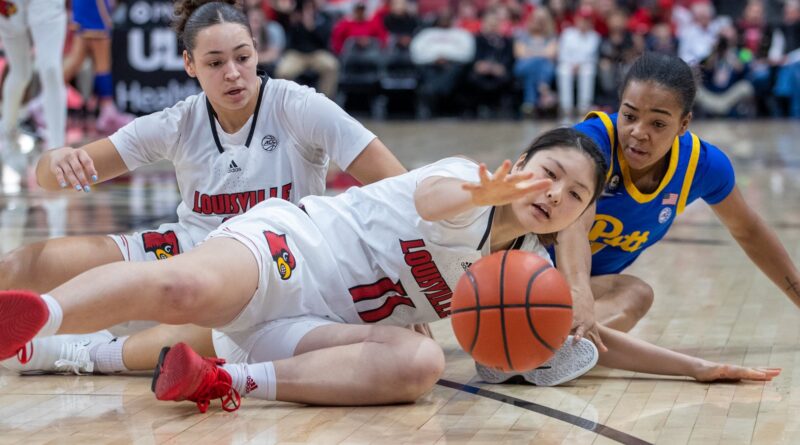 The University of Louisville women’s basketball team needed a spark. Badly needing a  catalyst to kick into a higher gear Sunday against Pittsburgh at the KFC Yum! Center. Enter an unlikely source senior guard Norika Konno.

Konno did what she was asked to do. Score, defend and create havoc.

When Konno entered the game the Panthers were having their way, leading bas many as four points late. UofL (13-5, 4-1) would rally for a 76-69 victory. Without Konno’s play it might not have been possible. “Norika was outstanding,” said Coach Jeff Walz. “Just really excited for her with everything sees been dealing with. To be able to come out and play as she did in a really big game was great.”

The 5-foot-10 senior guard from Sundai, Japan, Konno finished with 11 points, three assists, three steals and two rebounds. She entered the game averaging 1.9 points in 10 games and playing about an average of 10 minutes per contest. She played almost 17 Sunday.

Walz has had to kind of play it by ear with Konno. He ask her if she’s ok and ready to play before games. “Yelp. I ask her. said Walz. “I’m not going to throw her in a game if she’s not ready for it. Sure I love to win. But I’m not going to do it at somebody else’s expense.”

Konno’s previous best game this season  came when she played 25 minutes and scored 10 points,  seven assists and a steal in a win over Longwood in November. Maybe Konno has turned a corner. If the Cardinals want to make another Final Four run they will need steady play from her.

“Reek had a big smile on her face when we went into the locker room,” said Walz. “I’ll talk to her tomorrow (Monday) and see how she is doing. School starts up (Monday). I think she’s got 19 hours so she can graduate in May. It’s unfortunately not one of the classes is being taught in Japanese. It’s hard. She works hard and is a great young lady. I was really, really excited for her.”

Walz’ team has back to back road games this week. Thursday at Virginia Tech, 7 p.m. and Sunday at Florida State at 1 p.m.

Every game in the Atlantic Coast Conference seems to be a dogfight. Seven teams are ranked in the top 35 of the NET rankings. Louisville is 35th. Among the Power-5 conferences, the ACC holds the best NET ranking at 44.13.