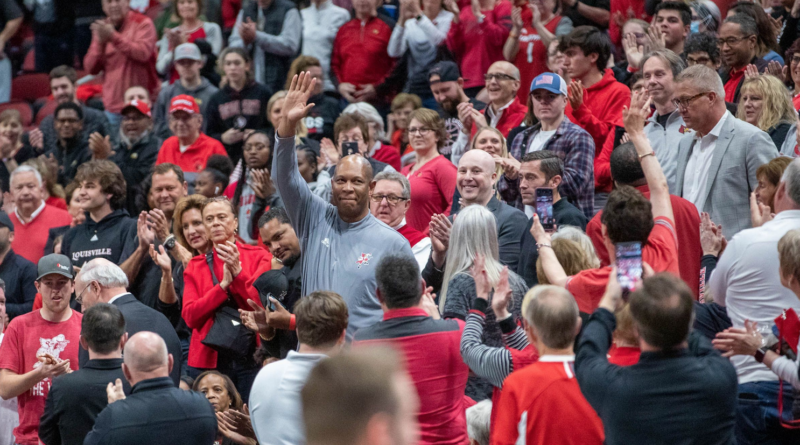 Moments before the UofL-Albany tipoff in the first round of the NCAA women’s basketball tournament, a huge roar goes up in the crowd of 8,407 at the KFC Yum! Center. Everyone turning, many of them rising to their feet, to catch a glimpse of a familiar face  A smiling face, raising his hands above his head, flashing that familiar smile again.

A busy night following a busy day in Louisville. Meeting with the board of trustees first thing Friday morning, a meeting with some of the UofL players, and widely viewed, televised community press conference in the KFC Spirit Room. Photo after photo with adoring fans, sharing stories with former teammates. The toast of the town. Louisville men’s basketball is front and forefront once again. Full of promise, the promise of a great future with a coach who loves the community, a product of the UofL basketball program.

Payne most recently served as an assistant coach with the NBA’s New York Knicks after fifteen years as a college assistant or associate head coach with both the University of Oregon and the University of Kentucky. He will be just the sixth head coach to guide the Cardinals in the last 48 years, following Denny Crum (1971-2001), Rick Pitino (2001-17), David Padgett (2017-18, interim), Chris Mack (2018-22) and Mike Pegues (2021-22, interim). Payne is the 23rd head coach in Louisville’s 108-year history and the ninth in the past 77 years (fourth since 1971, excluding interim coaches).

As a student-athlete at UofL, Payne scored 1,083 points in his career (1985-86), connecting on 40.1 percent of his career three-point attempts (85-of-212, fourth-highest in UofL history). He was a member of Louisville’s 1986 NCAA Championship team as a freshman and over his collegiate career, Louisville participated in three NCAA Sweet Sixteens, won three Metro Conference championships and three Metro tournament titles. As a senior playing under Hall of Fame Coach Denny Crum, Payne averaged 14.5 points and 5.7 rebounds and was named to the All-Metro Conference Second Team.

Payne was selected in the first round of the 1989 NBA Draft as the 19th overall pick by the Philadelphia 76ers, where he played four seasons (1989-93). He continued to play professional basketball abroad and in the Continental Basketball Association until 2000, with stops at the CBA Tri-Cities (Washington) and with teams in Italy, Japan, Brazil, the Philippines, Cypress, China, Argentina and Australia.

The past is prologue, preparing for his special moment under Louisville skies. Kenny Payne is home, hopefully to stay this time