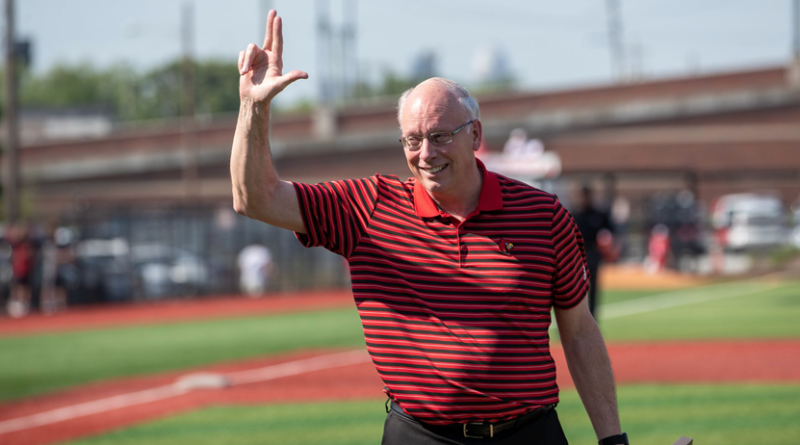 Editor’s Note: The following story on Kenny Klein appeared in the Murray Ledger & Times on June 3. Written by Steve Springer, the Observer’s son in Murray. Steve has degrees from Murray State and the University of Louisville. He’s a part-time sportswriter and an educator at Rhea School in Paris, Tenn.

The list of storied alumni that have left Murray State University’s campus over the years to go on to do big things in this world has been well noted, many of them front and center in their respective career paths.

They cannot all, however, be in the forefront of the public eye and be named NBA Rookie of the Year or star in a smash-hit Star Wars live-action series. There is another list of distinguished graduates that have excelled in their fields, yet sometimes are off the radar from the general public.

One of these behind-the-scenes stars, Kenny Klein, is hanging it up after more 40 years in the business of telling the world about collegiate athletes, the last 39 as sports information director at the University of Louisville. Klein graduated from Murray State in 1981 with his bachelor’s degree in journalism, served time as a graduate assistant, crossed the bluegrass to become SID at Morehead State University for two years, then spent the next 39 years at the UofL, becoming the youngest SID at an NCAA Division I school at the age of 23 and contributing to three national titles in basketball along the way.

“I received many fundamental journalistic skills, writing elements, editing, publication design and many other facets while at Murray State, while also helped me to understanding the needs of media covering our sports,” said Klein. “And while technology has changed immensely since that time, what I learned in TV classes was helpful in overseeing our broadcast center that produces live events for the ACC Network. I even took a meteorology class that has helped me today in understanding weather while dealing with so many outdoor events.

“While my education in the classroom was important, I considered myself as much of an apprentice as a student as well, spending as much time as I could outside of classes in the athletic department to absorb as much as I could from the entire athletic department staff there. I worked with multiple sports and felt completely prepared when I graduated from MSU.”
There were many faces and figures from Racer Nation that helped Kenny along the way.

“First and foremost was Doug Vance, the sports information director while I was there. He got me involved in this work after starting college in pre-med and taught me so, so much along the way.  He went on to the University of Kansas and later to become the executive director of the College Sports Information Directors of America (CoSIDA).  He’ll retire from that later position at our national convention in late June and we’ll go out together,” Klein said.

“There are so many other people that were instrumental to me while at Murray, including off the top of my mind, Johnny Reagan, Mike Gottfried, Frank and Cheryl Beamer, Leon Wurth, Mike Dill, Barry Johnson, Frank Fazi, Margaret Simmons, Ron Greene, Steve Newton and so many others. Plus, Doc McGaughey in the journalism department was my adviser and in addition to me, I know meant so much to so many people.”

Vance had glowing things to say about Klein, as well.

“From my perspective, there are two very obvious defining characteristics that stand out when I think about Kenny,” Vance said. “The first is his value system concerning commitment, hard work and caring approach about others. The second is that coast-to-coast authentic smile that is almost always present. Kenny is among the very best in our profession and has been for a long time. I had the good fortunate to work with him at Murray State when he was first getting started and I’m not surprised that he established himself as an icon in our profession.”

Klein racked up the honors and accolades throughout his career, including earning the U.S. Basketball Writers Association Katha Quinn Award in 2012 for exemplary service to media members covering college basketball. He was also inducted into the Kentucky Sports Hall of Fame in 2017.

According to a press release from UofL, “among his administrative roles as the primary men’s basketball contact for the Cardinals, Klein has worked every UofL men’s basketball event, a stretch of 1,309 consecutive games. During that time, the Cardinals posted a combined 888-421 on-court record and achieved numerous conference and national titles.”

The many hats that Klein would wear for UofL, and his proclivity to not be scared getting his hands dirty with the day-to-day tasks, always stood out to current Racer Associate Director of Athletics Dave Winder.

“When I came back to Murray State in 2001, I was well aware of the sports information guys that had been there before me,” said Winder. “I think in a lot of ways, pioneers like him inspire me because you think of all the changes we’ve gone through since I became SID in 2005, the changes that he has had to endure for 39 years, it’s just a constantly changing industry, and Kenny has stayed with it every step of the way.

“And I think the thing that sets him apart from everybody else is just the manner in which he went about his business, always professional, always a friend to so many in the business. Even though he had been in the business a long time, he was still doing the grunt work of the SID, and that was stats, write-ups, photos, making credentials and all that kind of stuff. He never let go of all that stuff even though he had many, many other responsibilities on top of that.”

Lots of memories from his time on campus permeates his MSU nostalgia, but a couple specific times stood out from the rest.

“One of the most memorable would be our baseball team finishing one win away from the 1979 College World Series, advancing through the winner’s bracket before falling at Mississippi State,” Klein said. “Earlier in 1979, our football team won the OVC Championship for the first time in 28 years.”

A sports information director’s job deals with all of the nuts and bolts of the daily operation of an athletic department, but doesn’t shine in the spotlights of a basketball arena, or under the lights of a football field. For former Racer Klein however, his light shined brightest in his field.