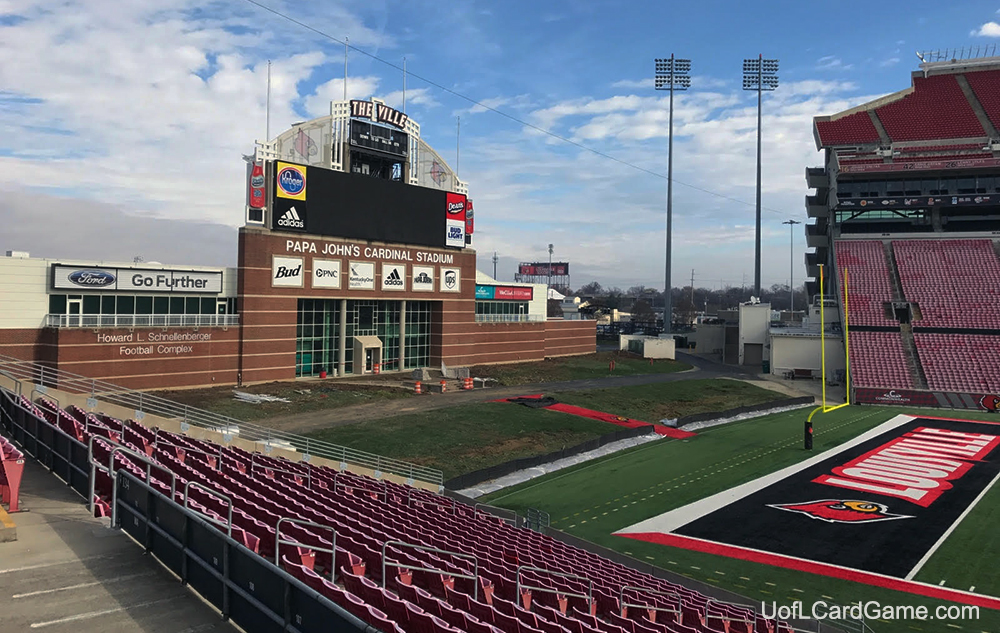 Johnny Unitas no longer stands guard over the North end zone at Papa John’s Cardinal Stadium. In his absence is a stub of the concrete statue honoring the former University of Louisville great.

The statue has been moved and won’t be back until the expansion is complete in 2018.

That was the word from JCPS Stadium Manager Michael Ortman who is putting a padlock on Gate 9 a couple of minutes after the observer leaves the stadium on Tuesday morning.

“Where’s Johnny U?” the observer asks.

“I can’t say,” says Ortman. “The statue has been moved to another location where it will be safe and secure.”

“What about the bricks with the donors’ names on them?”

“They have been palletized,” replies Ortman. “and they are in safekeeping as well.”

“You sure you can’t tell us where Johnny U is being stored?”

“No way,” says Ortman, wondering who the character is asking all the questions. “The statue is in a safe location and I’m not saying anything about the whereabouts.”

As Vice President Tom Jurich promised, the stadium expansion began two days after the final game of the 2016 season. Work is clearly visible in both the north end zone and north of the Howard Schnellenberger football complex. Lots of preparation work for new utilities is under way in both areas.

The shell of the new end zone structure is expected to be in place during the 2017 football season, along with framework of construction of the new football training facility.

As for when and where Johnny U will be stationed when he returns , Ortman is equally mum.