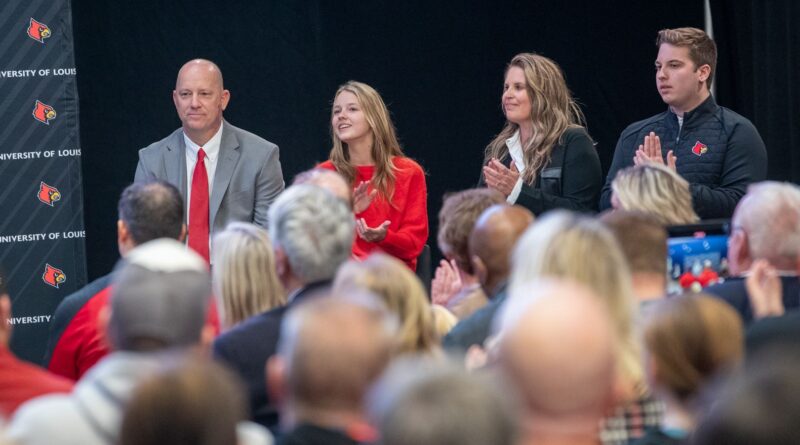 He wore jersey No. 11 as the starting quarterback for Howard Schellenberger’s Liberty Bowl Champions in 1993. He spent time in the National Football League for seven seasons and even spent time in the XFL. He returns to his hometown school, the University of Louisville as its 24th head football coach.

In a packed and exuberant atmosphere, Jeff Brohm was introduced at a late Thursday afternoon press conference before hundreds of admirers in the Angels Envy Club at Cardinal Stadium.

Brohm replaces Scott Satterfield who bolted for Cincinnati on Monday. In three days Athletics Director Josh Heird worked out the details and got the 51 year old coach back in the UofL fold.

Jeff, along with numerous other Brohms were welcomed with loud cheers and continuing applause. When Brohm walked into the room the crowd seemed for a second stunned with anticipation. Then came the first of several standing ovations. Brohms all around, friends, associates, former teammates, former coaches, all wanting to celebrate.

From Saint Bernard Catholic Church, Trinity High to the University of Louisville. Brohm truly returns to his roots. He played for the late Howard Schellenberger and coached under him.

“Those two men (Schellenberger and Dennis Lampley, Trinity) molded me into what I am today,” said Brohm during a 30 minute dialogue. “I got to play for seven plus-years in the NFL and around a lot great coaches and players. Dennis Lampley is the best. I learned a great deal from him.”

Brohm has agreed to a five-year $35 million dollar contract with incentives for winning six or more games, bowl games and a conference championship. He also will have a $15 million dollar insurance policy.

“I cannot really express what this opportunity means to me and my family,” he said. “I think people who know me, knows I like to win. I like to compete. It means something to me.”

Brohm promised an exciting brand of football. “We’ll be aggressive and run the ball if we have to once in awhile.” He also said his teams at Purdue improved defensively. “At Western we would throw it around a lot. When we got to Purdue the Big Ten is a big physical conference.”
Purdue lost a last second game at Syracuse this past season. He admitted not knowing a lot about teams in the Atlantic Coast Conference. “I’m not an expert on the ACC quite honestly right to this point,” said Brohm. “I think there are a lot of good teams around college football. The margin of winning and losing is very small.

“I just think putting the best product on the field that can play an explosive brand of football and get the ball to play makers as many times as possible.”

Defense will be important as well. “We will be aggressive as we can be. Eliminate big plays but try to get after the quarterback and apply pressure to him and be solid on special teams.”

Jeff, like his dad Oscar, wore number 11 during his quarterbacking days at UofL. But Jeff is No. 1 right now.