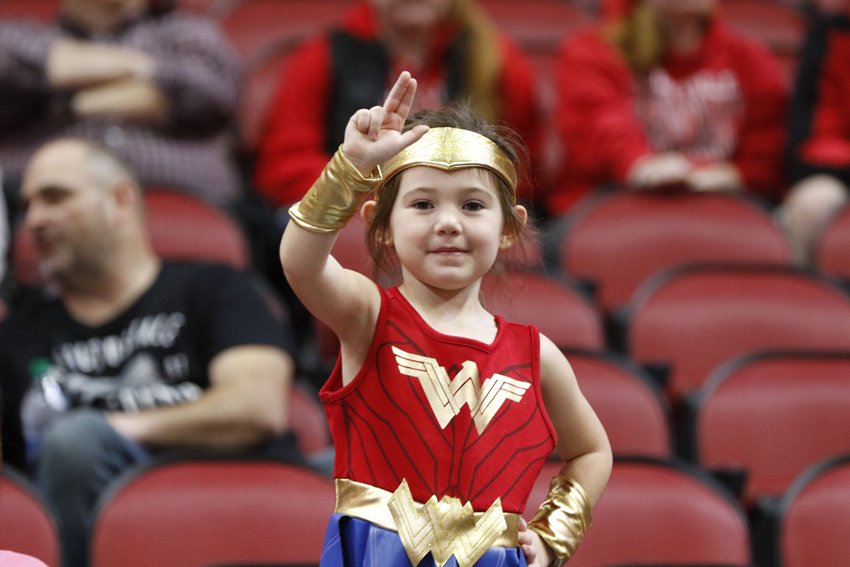 Above Photo by Mike DeZarn

The KFC Yum! Center was temporarily the center of the universe for many comic book characters on Sunday. Sprinkled throughout the crowd of 10,084 were such notorieties as Superman, Batman, and Captain America.

The one capturing the most hearts likely was the little girl showing up as Wonder Woman (see above photo). Up on her feet constantly, waving the L sign, cheering on her own heroes, standing ready to rescue the University of Louisville women’s basketball team if necessary.

Thankfully, Wonder Woman wasn’t needed on the court. Jazmine Jones was scoring 18 points for UofL in the first half, keeping the Cardinals in the game. She would total 24 points for the game, leading UofL to a 72-68 win over Syracuse.

The saving or clinching points would be provided by sophomore transfer Elizabeth Balogun, whose layup with 31 seconds left in the game would give Louisville a three-point lead. She would make one of two free throws at the 12-second mark for the final four-point margin.

Balogun would have a total of 13 points, along with four rebounds and a steal. Dana Evans, who was held scoreless in the first half, would wind up with nine points, including two 3-pointers, two assists and a steal.

Coach Jeff Walz warning UofL fans after the game that he expected every upcoming Atlantic Coast Conference game to be equally challenging, with many of them coming down to the wire like this one. Pretty credible, considering the close calls of the past three games — that included a one-point win over Kentucky and an overtime victory at Tennessee Martin.

One thought on “Jazmine Jones provides the Super on Heroes Day”