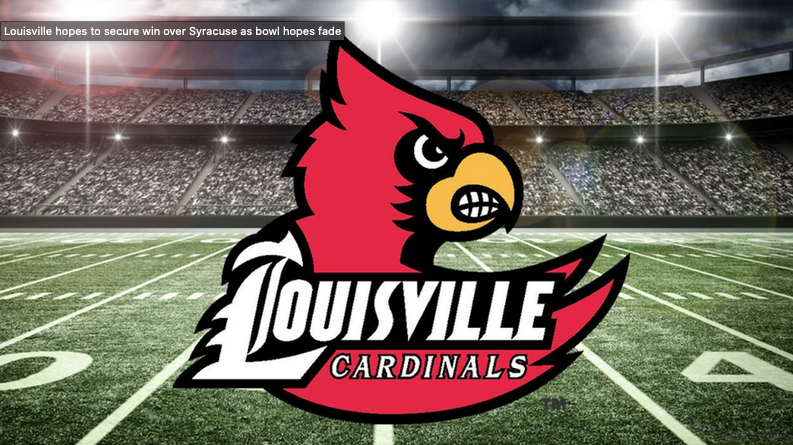 When one wakes up in the morning, the first thing that comes to mind is is it game day yet? One has been bitten by the opening of college football season bug, loving this time of year.
Eddie Peak is one of few Louisville fans that looks more forward to UofL football than basketball. Not knocking basketball, just like football more.

Particularly interested in this football season that begins in Saturday. Louisville travels to Syracuse for the opener, an Atlantic Coast Conference game, at 8 p.m. it pains me we have to wait so long.

All off season the coaches have promised an improved Cardinals team, prompting a 9-3 record prediction from yours truly.. Maybe a bit bullish. But listening to all the reports I thought I’d attack this was some positivity. Louisville is a four and a half point favorite by Vegas oddsmakers.

Hate to say things like must win. But this is about as MUST as you can get. If the Cardinals want to take the program to the next level a win against the Orange is a must.
Syracuse is predicted to finish last in the Atlantic Division. It’s coach Dino Babers is on the hot seat. He’s had one winning season in six years.

Syracuse (5-7 in 2021) thinks they are going to be better this season. The Athletic is forecasting a bowl game for the Orange. Even though Louisville is favored this will be a very difficult game.
It’s a conference game on the road in a hostile environment. Louisville needs this win if they are to get at my predicted nine wins. I can’t think of an opener more important than this one in several years.

A win could spring the Cardinals into a week two game Friday at Central Florida before the home opener the following week against Florida State. “We need to be ready out of the gate,” said coach Scott Satterfield.

It should be an interesting and entertaining season. Sleep is harder to come by the closer the season opener gets.