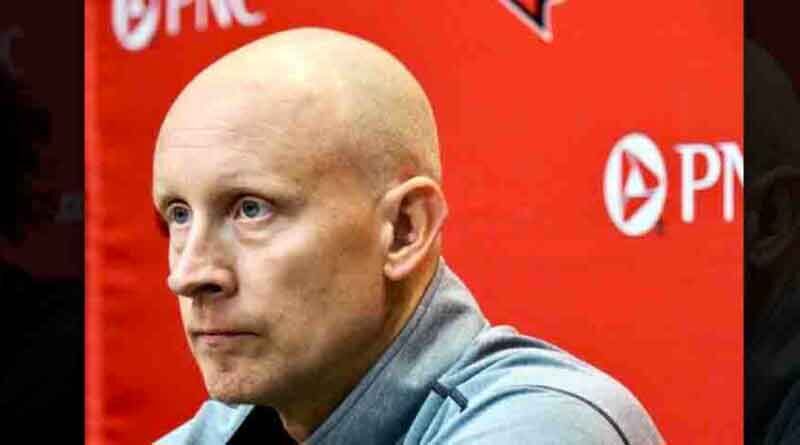 Not like starting all over but close for Chris Mack (Cindy Rice Shelton photo).
Basketball
Charlie Springer 1 min read

A team with a lot of promise two games ago bearing little resemblance on Monday to the one that was tied for first place in the Atlantic Coast Conference a week ago.

Not a fun place to be on Tuesday at the Planet Fitness Kueber practice center for the University of Louisville basketball team. Coach Chris Mack  breathing fire after a 13-point loss to Florida State that could have been much worse. His immediate task to undo whatever is was that pushed the season off the tracks. Preferably, as soon as possible.

No lighthearted banter before practices. The coach boss with a certain look to his eyes, no time for any nonsense or lack of focus. Duke coming to town for a 4 p.m. game on Saturday.

Mack not mincing any words after the post-game press conference on Monday. “It is fairly obvious that we got punked from the beginning of the game,” he said. “We weren’t who we needed to be to start the game. We really weren’t for the first 13-15 minutes. I am disappointed. We have a lot of growing up to do in order to match that type of intensity to compete at this level with some of the teams we are playing. We have a lot of work to do.”

A team with tons of toughness earlier in the season suddenly a group of lightweights, getting pushed around with ease by the Seminoles. Getting to be an old story, FSU having defeated the Cardinals in the last four meetings.

“I can only go on this year’s team, I can’t remember last year’s game,” he said. “We certainly watched it in preparation but we got thrown around. There were some things that had nothing to do with physicality. It doesn’t take any physicality to sprint back and find out who you are guarding and communicate. You don’t do that when you’re in high school, you don’t do that when you’re a freshman on a top 15 team a year ago that doesn’t play. You have to do it now and if you don’t do it now then Florida State is going to get wide open threes like they did in the first half.

“Our practices need to be better, we need to develop habits quickly so that our guys can be a lot better on game night.”

Not a good place to be.