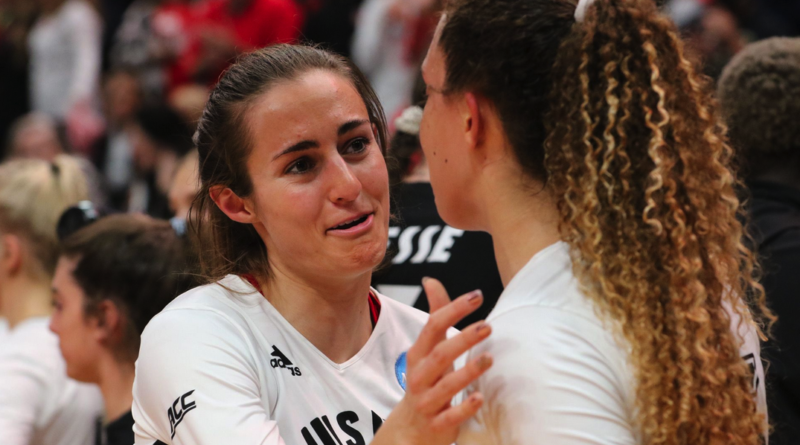 Too good to be true, that dream of going undefeated and winning the NCAA national championship with an undefeated record.

The best team in University of Louisville Volleyball history has been eliminated, one game short of completing a dream season. One inescapable conclusion here is that it could only have been accomplished by a Wisconsin team featuring a pair of giant blockers, 6-foot-9 Anna Smrek and 6-foot-8 Dana Rettke, respectively. A Wisconsin program in the Final Four for a fourth consecutive season.

Opportunities like this don’t come along very often, which makes the loss even more disappointing. This UofL Volleyball team had to be one of the complete Louisville teams in the school’s athletic history. A team that largely dominated the competition during the regular season, including seven wins over top teams. A team with so many talented players, so many vibrant personalities, living up to its potential. Doubling and tripling the UofL Volleyball fan base, charming their way into the hearts of the Cardinal faithful.

“I’m proud of the way we battled tonight,” Louisville head coach Dani Busboom Kelly said of her team’s effort in the loss. “This is a team that you could be with forever. It’s one of those really special groups that you just never want it to end.”

A team that completed the regular season 30-0, ranked No. 1 in the land. Winner of the Atlantic Coast Conference for two seasons in a row. National Coach of the Year in Dani Busboom Kelly.  Two First Team All-Americans in Tori Dilfer and Anna Stevenson. One Third Team All-American in Anna DeBeer. First trip to the Final Four and compiling a final record of 32-1.

Anna Stevenson:  “It’s the best season I’ve been a part of by far. But this group has just been the best. And it’s just kind of sad to think that I’m done playing college volleyball, but having played at Louisville makes it that much harder to leave because it’s the best of anything I’ve ever been a part of — team-wise, program, best staff ever. I’ve just really loved every minute of being with this team. And I think I’m just sad it’s over.”

Tori Dilfer:  “I can’t say much more other than this last year has changed me as a person, as a player. These people have changed me, I hope, all for the better. I hope I’m coming out as a much better person than I came in … Never could I have imagined what this year would have brought, but I was just excited to be part of this team for another year. These people are 100 percent the reason why I still absolutely am in love with the game of volleyball. And I love competing. It’s because of them.”

Louisville Volleyball took some giant strides forward this season, making some incredible history. Falling short of its ultimate goal but leaving undeniable inspiration for all who follow them.

2 thoughts on “Greatest season a new standard for Louisville Volleyball”