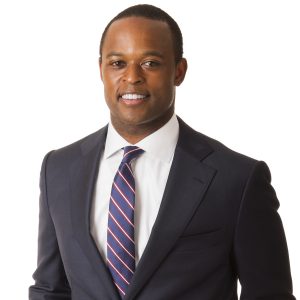 The odds of Louisville having a friendly face in Frankfort will be significantly enhanced if Daniel Cameron is successful. He’s running for the post of Kentucky Attorney General on the Republican ticket in May.

Cameron is a former University of Louisville football player, earning a Bachelor’s degree as a McConnell Scholar in political science  and a law degree from the UofL Brandeis School of Law. He was selected by the University to give one of the student commencement speeches at the 2011 graduation ceremony.

He  became a Cardinals’ fan after his parents moved to Elizabethtown from Alabama in his youth. “They were the team in our back yard and it was easy to root for them 30 minutes down the road,” said Cameron, who was born in Plano, Texas.

One of his fondest UofL memories was the football team’s appearance in the 2007 Orange Bowl. Cameron was a freshman that season, playing at safety and on special teams under Coach Bobby Petrino. “At that time, he was seen as someone with a great offensive mind and a great X’s and O’s coach, somebody who paid a lot of attention to detail,” recalls Cameron. “Winning that game was one of the biggest milestones in UofL football history.”

Cameron would also play under Coach Steve Kragthorpe whom he said “seemed like a great guy but it just didn’t work out for him.”

He said he also benefited greatly from some challenging experiences at UofL’s McConnell Center. “I was able to do both because there were a lot of gracious folks in the football office and the McConnell Center,” he said. “I remember having to miss a football practice because of an academic event, and Coach Petrino told me to tell McConnell to keep the lid on gasoline prices or something to that effect.”

Later, as legal counsel to U.S. Senator Mitch McConnell in Washington, Cameron would accompany McConnell on some trips to Louisville for several football games. “He rarely misses a football game, he’s an avid follower and an avid attender,” he said. “The only reason he misses is if there’s something really important going on in Congress.”

Before going to Washington for more than two years, Cameron was an attorney with the firm of Stites & Harbison. He’s now with Frost, Brown & Todd, one of the most prestigious law firms in the region.

Cameron says he is running for the office of Attorney General “because it is the best platform from which to confront the public safety challenge of our lifetime: the drug epidemic,” he said. “I’ve seen too many families torn apart by drug abuse. The Attorney General should be the leading voice in confronting this challenge.”

Cameron believes the office has been overly politicized by Andy Beshear, the current occupant who has often clashed with Kentucky Governor Matt Bevin, suing him multiple times for his use of executive authority.

One of the Beshear’s lawsuits led to a temporary reversal of Bevin’s appointments to the University of Louisville Board of Trustees. The turmoil that followed the Beshear’s challenge is credited by some as a major factor in UofL being placed on academic probation for a year.

“The last four years Andy has spent a lot of time sort of prioritizing being the opposition to the Governor,” he said. “Some of the things he has involved himself have been driven specific policy view. He has used his office in many ways to be the chief legislative officer and the chief policy officer as opposed to being the chief law enforcement officer.

“I want to return the Attorney General’s Office to being the chief law enforcement office,” he continued. “The No. 1 issue in terms of public safety  challenge is the drug epidemic. The Attorney General needs to be the driving force on that issue. The number of drug overdoses in Kentucky has been devastating. The AG needs to use the bully pulpit to getting all of the law enforcement agencies working on the same page .”

Cameron believes resolving the drug crisis in Kentucky will have to include contributions from all segments of society, including the universities and other agencies. He is pleased with with the new leadership under Neeli Bendapudi at the University of Louisville, and said he looks forward to working with education leaders as well on drug issues.

“We’re in it to win, and we’re prepared to tackle the immense challenges that come with the plague that is disrupting so many lives,” he said.