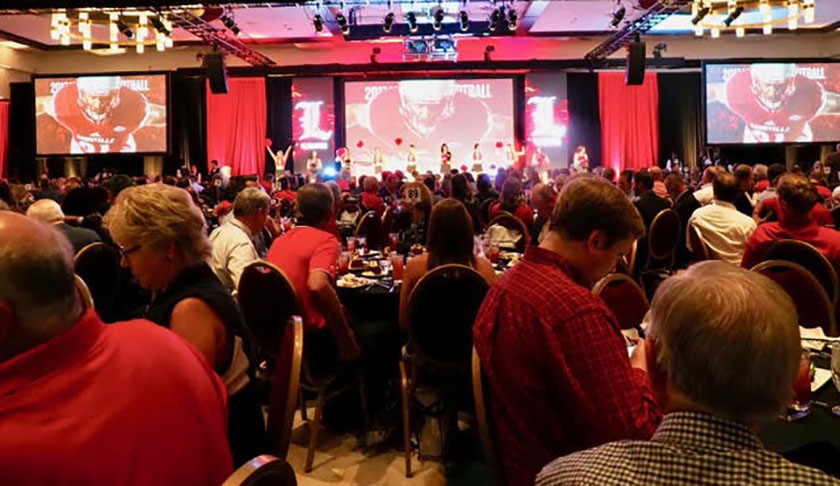 The Summer of 2017 is winding down, finally coming to an end, and the end can’t get here soon enough if the enthusiasm of University of Louisville football fans is any indication. Approximately 1,600 of them packing the grand ballroom of the Louisville Marriott for the annual Kickoff Luncheon.

The annual luncheon always a welcome relief for fans, cut off from UofL sports for almost three months, finally getting back together again with their fellow fans. Eager to celebrate UofL again, much in common, enjoying a refuge from the constant attacks, ready to start winning again.

Coach Bobby Petrino saying the Marriott management told him it was the largest crowd for any event ever held at the downtown hotel.

Jurich announced the beginning of a “We The Future” marketing campaign. “You will see that everywhere around campus,” he said. “We as Card Nation have built and built and built, and now we really want to build for the future and look to the future. You’re going to be hearing much more about it.”

The immediate focus, of course, is the future of UofL  football, and the opening game against Purdue at Indianapolis Sept. 2. Quarterback Lamar Jackson recalls how the 2016 season ended and indicated that he’s eager to get UofL football going in the right direction again.

“We have a little chip on our shoulders after losing the last three games last year,” said Quarterback Lamar Jackson. “We’re going to come hard. I’m telling you that right now.”

Coach Petrino said he really likes this team and believes Jackson will have another great year. “The respect that Lamar has from his teammates because of how hard he works makes us all better,” he said.

“He’s going to focus and really concentrate on utilizing the talent around him … His knowledge of the game is unbelievably improving and his ability to read defenses and make checks at the line of scrimmage is something I’m really excited about right now.”