Let me make this perfectly clear. I know Kentucky has a good basketball team. I’ve got the same kind of boastful and arrogant UK friends you do. They tell me this is the dawning of a new age in UK hoops. John Calipari is the promised messiah, the wizard of Lexington. They say John Wall is the best basketball player in the history of the game.

They also tell me my University of Louisville basketball team is undisciplined, erratic, weak in the paint, coached by a man of serious moral turpitude. We are little brother.Â  We are insignificant. 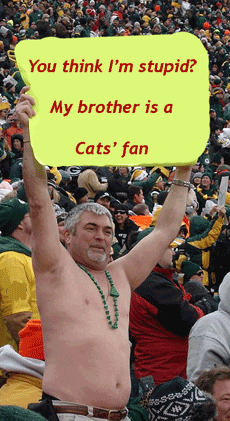 Is it all more the reason why I look forward to a Louisville win in Rupp Saturday. We ruin the prom queen’s coronation. The fly in the soup.

Ah yes, Rupp Arena. I do not like Rupp Arena. It will be filled as usual with wild-eyed, blue-clad zealots who will have dozens of comments about my red sweatshirt and Cardinal cap.

I will receive incorrect change at the concession stand, my path blocked in the concourse and vivid descriptions hurled at me from the same lips that sweetly sing hymns on Sunday. Rupp of the steep stairs and wooden bleachers. The shrill voiced public address announcer. The enemy’s place

It does not matter. I will go unaffected. I realize that despite all the Coach Cal rhetoric about how this game and crowd reaction should be focused on the players and not other sidebars, I will be a strange man in a hostile land. Surrounded by pompous and proud. Biased and boorish. The rivals.

I love it. To go into Rupp and slay the dragon; to walk thru the belly of the beast with the win on my shoulder…this surely is a belated Christmas gift that even red suited Santa would acknowledge with a hearty “Ho, ho, ho”.

Earlier in the week I reveled in a UK bowl loss. But now, it’s all about Saturday. For two hours I will root against the rival. I will lose my objectivity and snarl at every whistle, ruling and court action that goes against Louisville.