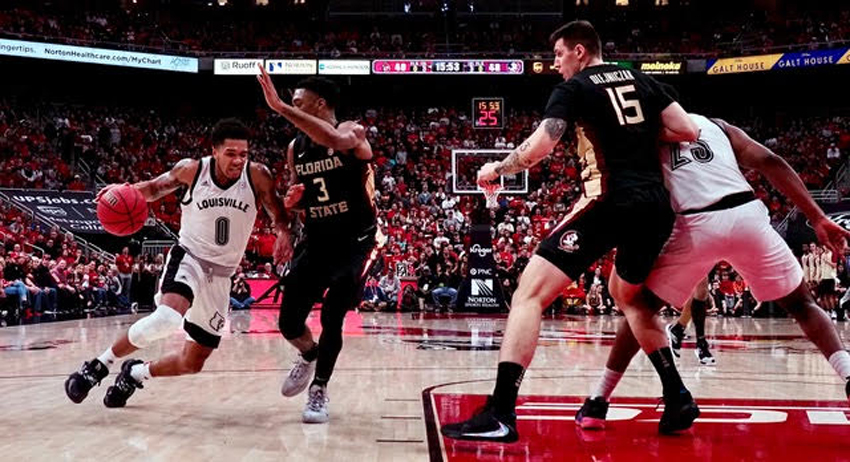 Interesting how quickly things started to go downhill after the University of Louisville basketball team rose to become the No. 1 team early this season. Jumping out to a 9-0 record, utilizing primarily the same players from an unranked team last season.

Seems like a long time but little more than a month ago. The lofty ranking more than a little premature, as Coach Chris Mack indicated at the time. With their 78-65 loss to Florida State at the KFC Yum! Center on Saturday, the Cardinals have lost three of their past five games.

Ranked seventh going into the game , Louisville will be out of the top 10 next week, possibly headed back to obscurity again. Few signs of any progress since being exposed by Texas Tech at Madison Square Garden. No bouncing back after the annual loss to Kentucky.

Before the season began, UofL was predicted to be a top five team by the people who make expert college basketball picks. Primarily based on having one of the best recruiting classes in the nation.

Once a starter, five-start recruit Samuell Williamson saw less than eight minutes of playing time on Saturday, claiming a rebound but not scoring a point.

Familiar scenario elsewhere with Jordan Nwora scoring most of UofL’s points, a total of 32 points in this one. But Dwayne Sutton, Steven Enoch, Darius Perry, Ryan McMahon and Malik Williams adding a combined 23 points. On defense, allowing Florida State to hit 55% of their field goal attempts.

The rise to the top, occurring as quickly as it did, may have been the worst possible scenarios for a team that needed to improve dramatically from last season. Taking success for granted, not needing much effort to get national recognition, lacking significant motivation to work harder, to get better.

The veterans, including Nwora, are exhibiting many of the same weaknesses from a year ago. Making many of the same mistakes, inconsistent on offense and defense, still overly dependent on Nwora. The freshmen, languishing on the bench thus far, needing experience. Going to have to get better the hard way, against the best that the Atlantic Coast Conference has to offer.

The leadership is going to have to come from the freshmen if it is to happen, but that scenario would appear to be unlikely — at least at this point in the season.