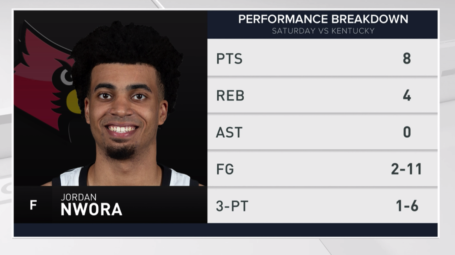 Best to resist becoming overly optimistic or excited about a University of Louisville basketball game in which the opponent is the University of Kentucky. UofL fans will inevitably be disappointed, the men having lost 10 of the past 12 games to UK in the series. Usually a silver lining can be found if UofL is able to cover the college basketball spread but unfortunately not today.

The rankings, the quality of the players, the season record, none of these things appear to be relevant. The rivalry became lopsided over a decade ago, shortly after John Calipari made the trek from Memphis to Lexington.

Still an intense relationship, however, judging from the ferocity of UK fans in Lexington on Saturday. From the looks on their faces, the self-respect of many seemingly hinging on beating Louisville. The Wildcats rescuing them one more time, this time with a 78-70 overtime decision before 20,437 at Rupp Arena.

A familiar sequence in the series, UofL players playing tight, reverting to early season form on offense and defense. Jumping out to a quick lead at the start, only to quickly give it up and watch UK build a lead, widening it, threatening to put the game out of reach by halftime.

Louisville’s leading scorer, Jordan Nwora, a non-factor most of the game, unable to get open, unable to make layups or long-distance shots on those rare occasions when he was open, or make crucial free throws for that matter. Watching the game from the bench much of the second half.

The difference between a blowout and an overtime win this time may have been that Kentucky doesn’t have the killer instinct or the  shooters to put the game away. Allowing Louisville to whittle away at the lead behind a determined Dwayne Sutton, UofL somehow managing to tie the score at 61-61 at the end of regulation.

The Cardinals would actually have a three-point lead in overtime before their luck ran out, coinciding with an ugly airball by Ryan McMahon. At that point, with UofL behind 72-70 with 21 seconds to go, the air going out of the balloon. UofL suddenly inept, giving up the ghost, conceding one more time to the Wildcats.

Nwora, averaging 21.2 points per game, could manage only two of 10 field goal attempts and three of five free throws for a total of eight points in the game that matters most for Cardinal fans. McMahon one for five from the field and one of two from the free throw line for four points.

As for the over all free throw shooting, pretty dismal with Louisville making only nine of 20 attempts, clank, clank, clank.

Can’t be disappointed, however, in Steven Enoch, the fifth-year player leading his team with 18 points and five rebounds. Dwayne Sutton keeping UofL in the game, contributing 14 points and 10 rebounds.

Were it not for the growing frustration with the lack of success in the rivalry, one would have to acknowledge that Louisville did scratch its way back from a 12-point deficit against a team with its back to the wall. They were in the most intense environment they will see this season, with a very real chance of winning.

A bitter loss for sure but it still only counts as one loss in a season in which Louisville is 11-2 and ranked third in the nation. The pain will quickly subside as the Cardinals prepare for equally motivated foes in the always rugged Atlantic Coast Conference competition.