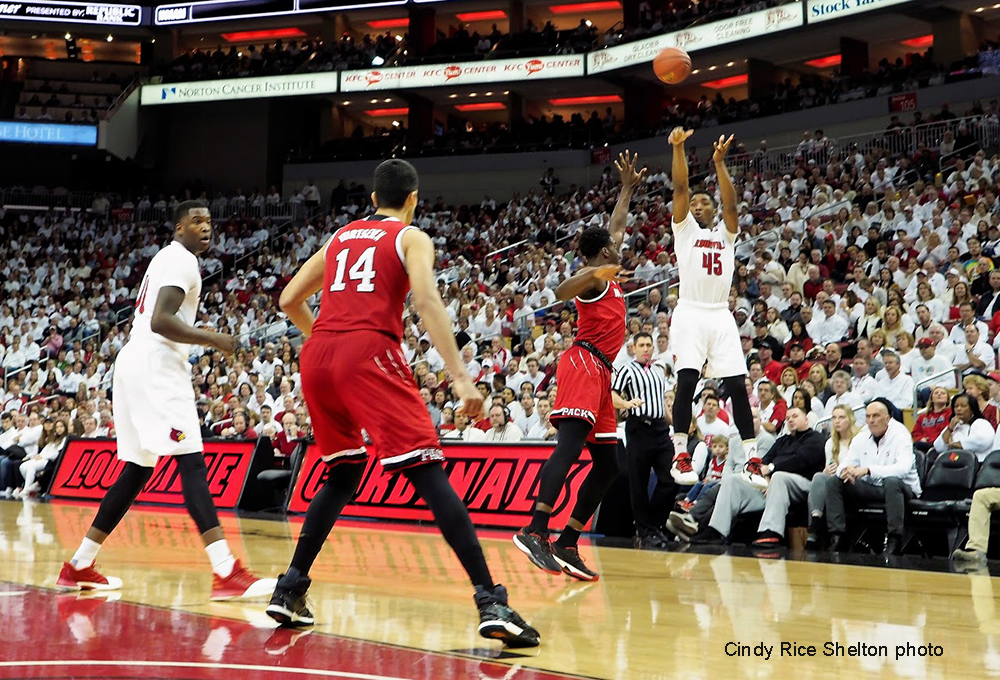 Been a few years since the University of Louisville basketball team had a player who made scoring look as easy as Donovan Mitchell did during the first half against North Carolina State.

An amazing offensive performance, Mitchell scoring UofL’s first 14 points, winding up with a total of 28 for the game in an easy 85-60 win over the Wolf Pack. This following an equally impressive outing earlier in the week when he scored 29 points in the 106-51 win over Pittsburgh.

Quite a contrast from his showing at Florida State where Mitchell was held to six points in a three-point loss at Tallahassee. The resurgence possibly sparked by a conversation with his father after that disappointing showing.

“Dad told me I always start out slow,” he related. “He said I should be the one who goes out there and sets the tone.”

Couldn’t have happened at a better time, with UofL point guards Quentin Snider and Tony Hicks sidelined with injuries.

“I don’t really think about it. I just focus on the next play, getting a steal or a deflection,” he said. “I was just open and knocking down shots.”

The only negative is that there were reportedly 36 NBA scouts in the crowd of 21,650 at the KFC Yum! Center on Sunday, most of them to get a look at NC State’s Dennis Smith, Jr.  Mitchell was dominant, however, prompting thoughts that he could be tempted to enter his name in the draft following the season.

Don’t look for Coach Rick Pitino to discourage Mitchell from leaving early. Players don’t seem to pay him much attention when a future in the NBA seems to be within reach. The days of expecting exceptional players to stick around through their senior year are behind us.

May be better just collecting a paycheck and sitting on the bench as Chinanu Onuaku, UofL’s most recent early departure, is doing with the Houston Rockets. He has been in two NBA games this games this season, collecting only six points.

Probably best for UofL fans not to worry about Mitchell’s future. Enjoy how quickly and how far his game has advanced during his sophomore season. He’s playing at another level, making his teammates better and putting Louisville in a position to be highly competitive in February.