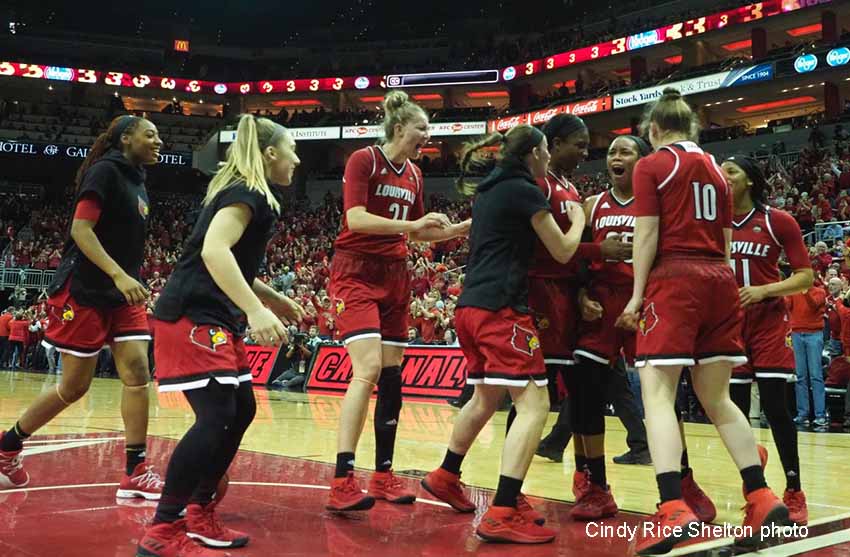 One of those milestones, the perfect time for a game in which the University of Louisville women’s basketball team can do little wrong. The third-ranked Cardinals taking down second-ranked Notre Dame 100-67 before a crowd of 12,614 at the KFC Yum! Center.

A nationally-televised game, a prime time performance, a result that can’t be ignored. UofL 100, Notre Dame 67, and it wasn’t that close.

Ending an 11-game losing streak to the Irish over the past nine seasons, the Cardinals obviously enjoying every minute. Especially in the first half, racing out to a 56-28 lead at the half. Another big lead at the half, but UofL not about to allow any frantic comebacks, like hanging on for dear life at the buzzer.

Not this night, not with the UofL women playing a complete game, a 40-minute effort, displaying a killer instinct when it matters the most. On a national stage, dominating an opponent against which it has been frustrated time and time again over the past decade. The win improving UofL’s record to 19-0 overall and 5-0 in the conference.

Asia Durr would provide the outside presence, making the first of eight 3-pointers at 7:47 in the first quarter, giving the UofL women their first lead at 10-7. They would double the score over the next six minutes. Durr would connect on 13 of 18 field goal attempts and lead all scorers with 36 points. She was handing out four assists.

Her fellow former ACC Player of the Year teammate Myisha Hines-Allen would provide the inside presence, making 15 of 20 field goal attempts while scoring 31 points. Hines-Allen would corral 12 rebounds, turning in her seventh double-double of season and the 36th of her career.

Kylee Shook intimidating the Irish in the middle, diverting numerous drives while receiving credit for four blocks. Three turnovers, unfortunately, meaning she can only get better.

A day or two to treasure this one. Seven days before the next game at Pittsburgh. Plenty of time to come back down to earth.