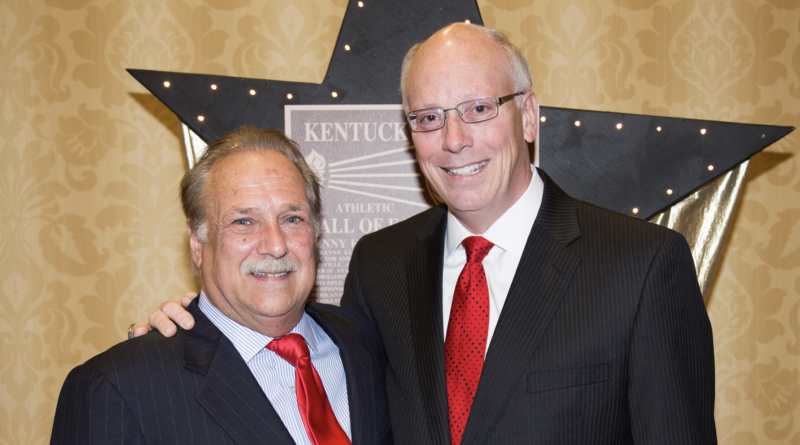 Donnie Russell was among the first to congratulate Kenny Klein to the Kentucky Athletic Hall of Fame in 2017.
Administration Baseball Basketball Football
Donnie Russell 5 min read

Editor’s Note:  Donnie Russell is a former assistant and fundraiser in the Athletic Department at UofL. He is a former play-by-play announcer for basketball, and still calls occasional games for women’s basketball and baseball. One of his biggest claims to fame was his role in hiring Kenny Klein at the university.

Despite having won the national championship in basketball three years earlier, the University of Louisville Athletic Department was not the ideal place to work in 1983. The offices were located in old military barracks that would soon be condemned. The area was heavily industrialized and the sewers would often back up during rainy weather. The offices were cramped, the chairs were squeaky, and the atmosphere was intense.

Kenny Klein came into a situation in 1983 where the press box at football games hung tenuously under the roof at Fairgrounds Stadium. There was a weight limit and only a certain number of people could be accommodated in the press box. Baseball games were played at the old Parkway Field, which had seen many better years. There were raccoons that frequented the area and we made it a rule to never leave anything behind that you could eat or drink. Women’s basketball games were played at the Manual gymnasium.

Bill Olsen, former assistant to Denny Crum, got the job of athletic director in late 1980. He had a meager budget but big plans for the program. He hired me away from Morehead State University where I was director of the Eagle Athletic Fund. He was impressed with all the new facilities that were going up at MSU and had visions of a Cardinal Athletic Park at UofL. He also wanted to increase the support staff.

Olsen called me about coming to UofL to assist in fundraising. I agreed to come but I also recommended that we also hire Kenny Klein to work as an assistant in the Sports Information Department. Kenny had been on my staff as the sports information director for two years at Morehead.  Shortly after that, the then Sports Information Director (SID), Joe Yates, quit to take a vacancy at Louisiana State University.

There was no hesitation on my part to recommend Kenny. At the young age of 23, was already a professional and was as dependable as they come. If I needed the job done right, I made sure Kenny was in a leadership role. He never said no and never needed supervising.  I also had gotten to know Kenny pretty well off the job, living in the same housing complex at Morehead. We also went through some tough family situations and leaned heavily on each other for strong support. He was a guy I could count on in any situation.

Olsen received criticism from some important boosters for hiring such a young guy as SID. That didn’t both Olsen, a former Marine, because he recognized Kenny’s leadership qualities as well. Olsen was not an easy guy to work for and the fact that our department was greatly underfunded didn’t make things any easier. I always felt lucky that we actually had typewriters at the time, times were so tough. Olsen ignored the second-guessing and gave Kenny his full support. Olsen was one of those guys who subscribed to negative motivation but that never seemed to bother Kenny. He loved being here, loved the work and loved being a part of something with vast potential.

Kenny quickly impressed the working media with his responsiveness to their needs for timely and accurate information. It didn’t matter how large or small your media operation was, Kenny would return each and every call. It is as true today as was then.

UofL basketball was a leader in computer technology shortly after it became available in the mid-Eighties. The athletic department worked with a retired engineer from a coal company to start keeping statistics by computer. The UofL stats crew, considered the best in the business, was reluctant to use computers for actual games. That didn’t matter to Bill Olsen, who made his feelings known. Kenny was forced to tell the stats crew, “Bill Olsen said we paid $3,000 to use this process and he wants you to use it!” No ifs, ands or buts about it. The stats crew agreed to use the technology but only if they had a backup using actual people. That worked well, even for an NCAA regional, and that was the beginning of computer stat tracking for programs across the country.

Kenny was a conscientious person but he also liked to have fun and play tricks on his co-workers. Back in the early days, we used telecopier equipment to transmit game summaries and box scores to the Associated Press and United Press International, the national wire services. We had to send the pages one at a time over telephone lines. There was one big game that UofL won and I was eager to get the information out. Well, Kenny kept telling me that the process had failed. Fortunately, he was not able to keep a straight face. I think that was his way of celebrating a big win.

He also enjoyed winding down after big games. We would close down bars on Beale Street after wins against Memphis State. He knew how to have fun and make people comfortable even without being the life of the party. He was one of the best people I ever worked with and I consider to be the brother I never had, helping not only me, but the other people he worked with and the University in ways that are way beyond our comprehension.

Kenny went through some unbelievably challenging times during the Rick Pitino years, something that Pitino appreciated by presenting Kenny with a brand new Lexus at a basketball game. Kenny would earn that car and more after the events of 2016 when Pitino and Tom Jurich were fired. Then came COVID and some staff cuts. Long nights and long days, some of issues still lingering today. UofL could never have had a better person in the sports information role.

No one could have been more proud than me when Kenny was named to the Kentucky Athletic Hall of Fame in 2017. He will be inducted into the College Sports Information Directors Hall of Fame in June in Orlando. He has come a long way, constantly improving his craft, growing along with the University of Louisville. I am proud to have played a key role in getting him to UofL.  The best in the business,

Donnie Russell was a former administrator in the UofL Athletic Department. He also was a play-by-play announcer for televised Louisville basketball games, and, more recently, for UofL women's basketball, baseball and softball games.

2 thoughts on “Donnie Russell on hiring Kenny Klein at Louisville”