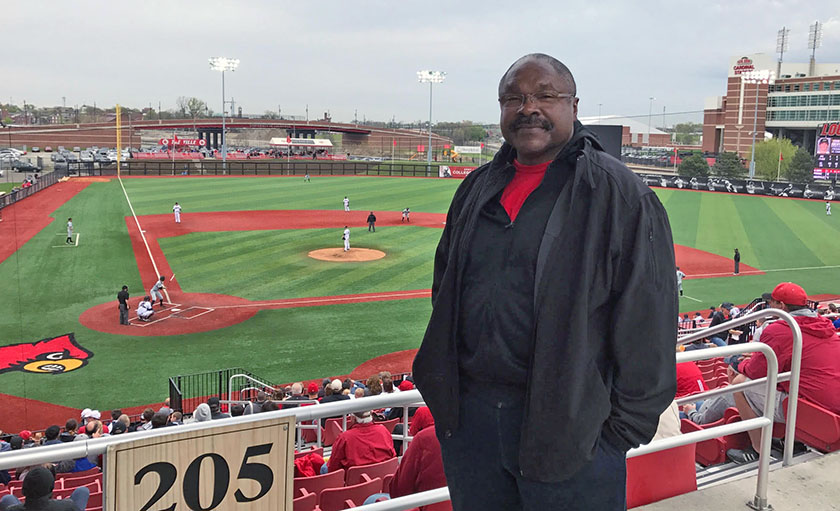 On any day when the University of Louisville baseball team is in action at Jim Patterson Stadium, one will find Donald Hairston pacing the concrete deck on the first base side of the field.

Hairston, who hails from Lexington, is the father of Devin Hairston, the Cardinals’ starting shortstop. His wife, Valerie, is at the stadium, too, but she is usually watching with a friend in the seats.

Hairston says he prefers to stand during games, especially when games are close and the outcome is still on the line. “Too much nervous energy,” he says.

Hairston is a retired information technology specialist and Valerie is a retired teacher from the Fayette County Public School System. They travel to Louisville for every home game, as well as to other games within driving distance.

The Hairstons had two sons playing baseball up until last year, including Dorian, the younger son, who was an outfielder at the University of Kentucky. They had no problem cheering for either program, according to mom who told the Courier-Journal last year, “It’s not stressful for me. I look at it positively: I win either way. One of my kids wins.”

Devin actually was committed to UK at one point but changed his mind after a meeting with UofL Coach Dan McDonnell. “Devin said Louisville was just the better fit for him,” said his dad. “He wanted to play for Coach McDonnell.”

Donald Hairston is elated that Devin is having a successful junior season, recalling that his son had to battle back from a collision with a University of Cincinnati player during his freshman season. “That was tough on everybody, and it took a while to recover,” he explained. “He is playing some of his best baseball right now.”

Devin is currently hitting at a .328 clip, with eight doubles, three triples, two home runs and 37 runs batted in after 38 games. Defensively, at shortstop, he has a fielding percentage of 99.2%.

When both players had games on the same day the past two seasons, one parent would go to the UK game, the other to the UofL game. No problem this year with Dorian enrolled in grad school in Lexington.