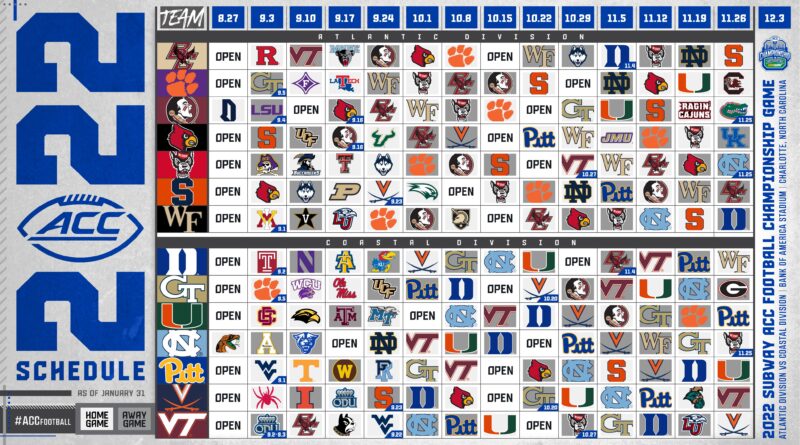 Editor’s Note: While the vast majority of Atlantic Coast Conference football fans welcomed the news that teams will play each other more often, there’s always an exception. This being Ed Peak, a longtime football fanatic, who abhors the change.

I don’t like change. But this is ridiculous. The Atlantic Coast Conference administrators and Athletic Directors voted to change the football schedule to a 3-5-5 setup. I’ll explain.

The University of Louisville will play three common opponents on a yearly basis. Miami, Florida, Virginia and Georgia Tech. The other 10 teams will be played twice during the four-year cycle. Once at home and once on the road. The new format will become effective with the 2023 football seaosn.

All teams will compete equally, no divisions. Then why have a league at all? I know the Cards don’t play every team in the league now. How in this strange and ever changing world of college athletics does this make sense? I think you should play every team in your conference on a rotating basis, home and away every year. Too many teams, 13.

Every coach will tell you “we can’t play nine league games. It will kill us.”

Let’s set up a nine-game league schedule and the other three are for rivalry games. Get away from playing James Madison or Central Florida, whatever the team. College football games are expensive. So make them as interesting as possible against good competition.

Hey, Athletics Directors, Coaches. Want to know why Cardinal Stadium was half full last season. Ticket prices. television, poor opponents and leftover Covid. Not to sling any arrows but up I-64 Kentucky is the king of weak schedules.
The Wildcats don’t even play the toughest teams in the Southeastern Conference. Alabama, Auburn, Texas A&M, LSU, Mississippi State on a regular basis.The conference requires them to play Georgia and Florida, probably against the wishes of everybody involved.

The Cardinals won’t play Clemson, Florida State, Virginia Tech or Pitt on a regular basis. I thought the reason Louisville joined the ACC was to improve football.

Things aren’t going to change as long as TV drives the financial bus. I’ll be watching, but not with as much interest.

The 2023 Louisville opponents at home are Boston College, Duke, Virginia, and Virginia Tech. Away are Georgia Tech, Miami, NC State and Pittsburgh.