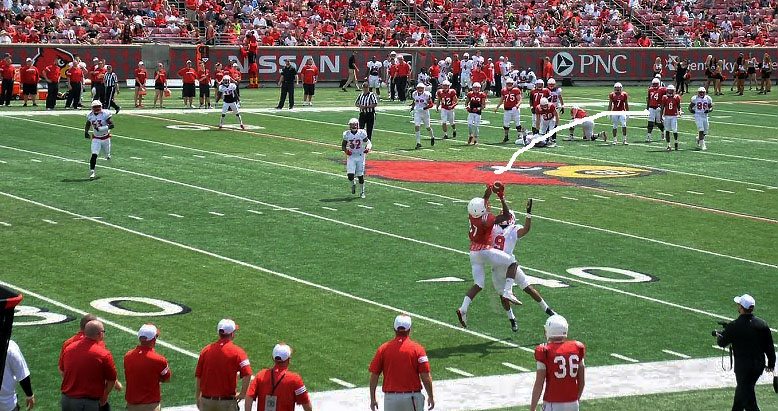 A time to focus on the beauty of the sport, without all the distractions surrounding the school these days. A day to be other University of Louisville fans, the ones there from the old days, through thick and thin. The younger fans, enjoying the spectacle, some taking for granted what Tom Jurich has made possible at UofL.

The stadium expansion clearly visible in the end zone, the concrete structure beginning to rise from the ground. The sound system, a string of speakers, suspending from a crane. Extra point and field goal kicks disappearing into a construction maze, the footballs being pursued by security type peoples.

A perfect day for college football, temperatures in the upper seventies for the University of Louisville’s spring football game. A game attracting 14,000-plus fans at Cardinal Stadium.

One of the big questions — who will be quarterback Lamar Jackson’s new favorite target? — may have been answered early and often. Turns out to be Dez Fitzpatrick, the 6-foot-2, 200-pound wide receiver from Farmington, Mich.

Fitzpatrick, a freshman, finished with nine catches, seven in the first half, for 176 yards and two scores. His best grab of the day came on a 20-yard pass from Jackson, in which he leaped over a defender for the catch. He would score on passing plays of 80 yards and 19 yards.

Jackson, best known for his speed in earning the Heisman Trophy last season, was focusing on finding receivers. Looking for first, second and third options, taking his time looking for the open man. He would complete 19 of 32 attempts for 346 yards and three touchdowns. He would gain 36 yards rushing while tacking on one rushing touchdown.

Fans would also get their first look at Jawon Pass, a 6-foot-4 redshirt freshman quarterback from Columbus, Georgia. While he would get off to a shaky start — one pass was intercepted by Jaire Alexander and returned 80 yards for a touchdown — he more than passes the eye test.

He’s tall and strong — at 6-foot-4, 220 pounds –with the kind of fluid movement that inspires confidence from his teammates and will have immediate respect from opposing defenses. UofL appears to have a backup who will be ready to play if the Jackson is sidelined or having an off-game.

A day to relax, enjoy getting back in the stadium, reflect on what transpired last season, and to ponder what can happen next season. No worries, no politics, just football. A good day to be a UofL fan.

Check out the gallery, courtesy of Cindy Rice Shelton: