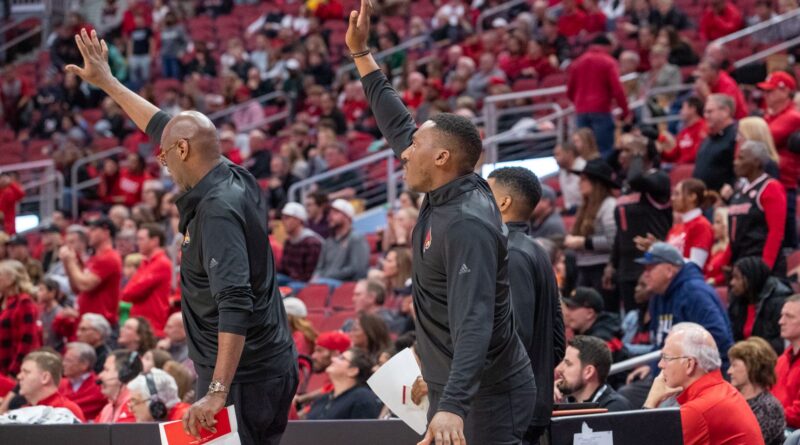 No, they're not throwing in the towel. Assistants Danny Manning and Nolan Smith trying to get through to their exhorts (Mike DeZarn photo).
Basketball
Ed Peak 2 min read

The University of Louisville basketball team had no one to blame but the people in the mirror after a last second loss to Wright State on Saturday. Unable to complete an in-bounds play, coughing up a 73-72 decision at the KFC Yum Center on a jumper by Trey Calvin.

No finger pointing. Enough blame to go around. Start with the out of bounds play at the Raiders end of the floor. El Ellis is double teamed and tied up. The possession arrow favoring Wright State.  “He caught it in trouble right away,” said Coach Kenny Payne. “I told him he could pivot and go left or let them (teammate) come to you.”

Calvin got the pass, dribbled, and let the ball go with 2.1 seconds remaining.

Louisville (0-2) wasted a 10-point second half lead. Wright State still trailed 70-65 with 2:58 as Ellis poured in a 22-foot three-pointer. Later Ellis would restore the lead to 72-67 with a layup at 1:30. That work would be the last Louisville would score.
Brandon Noel’s second straight layup got the Raiders within, 72-71, with 12.8 remaining.

That set up the frenetic ending. UofL should never be losing to a Horizon League team blowing a 10 point lead on their home floor.“Don’t let your opponent know you can they stay with you,” said Payne. “You are Louisville. Turnovers 19, 42 points in paint. You’re not going to beat anybody.”

Ellis had 29 points. Jae’ Lyn Withers added 15. Louisville shot 50.8 percent from the field, out rebounded the Raiders 35-32. But mistakes and turnovers help wipe out any positives.

“You can’t lead with your head down,” said Payne of Ellis the point guard. Ellis had eight turnovers. “How many mistakes. Why are you so high, so low. Others see your head down. It’s okay if you make a turnover. Just be sound.”

For the second game in a row Louisville has lost by a single point. “When will we all get it together,” said Payne. “When we all become one together?

Louisville hosts Appalachian State, Tuesday, 6 p.m. Another chance for Payne to get his first win.