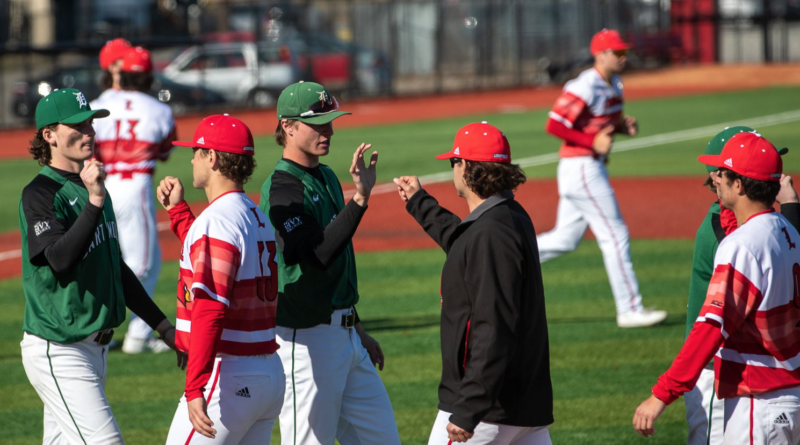 No one in the legacy sports media is expecting much from the University of Louisville baseball team this season, the Cardinals starting the season unranked for the first time in recent memory. The good thing is that there’s not much external pressure on UofL baseball, low expectations shouldn’t be hard to meet.

Try telling that to anyone who has been associated with Louisville baseball over the past 16 seasons. A program that been to the College World Series with a Coach, Dan McDonnell, who is the winningest active coach in college baseball with a 650-266 career won-lost record. There’s plenty of pressure to succeed.

A little slow getting out of the gate this season, but fresh off a 2-1 series win over Dartmouth from the Ivy League. The Cardinals winning the first game 19-5, losing the second 6-4 and wrapping up the series with a 16-3 win on Sunday. The Cardinals are 4-3 on the season.

“I keep saying it. We’re not perfect and I’m not saying we’re great but, man, we’ve got depth,” said McDonnell following Sunday’s win. “We’ve got to play the right combinations, play the guys who are hot, flip the ball to the pitchers who are hot. I like where we’re at early in the season.

“We’ve got to get better obviously, but I’m very optimistic about what kind of team we’re going to be able to be.”

UofL is currently led in hitting by first baseman and catch Ben Bianco with eight hits in 14 at-bats for a 571 batting average. That includes two doubles, two triples, a walk and eight runs batted in. Sophomore infielder Christian Knapczyk is next with a 400 batting average, with 10 hits in 25 at-bats.

Senior outfielder Cameron Masterman returns as the power hitter, with three homers and seven runs batted in and a 370 batting average.

If there’s anything The Observer has learned from 15 seasons of watching Dan McDonnell, it is that one Louisville baseball should never be taken lightly. No such thing as low expectations in this program.