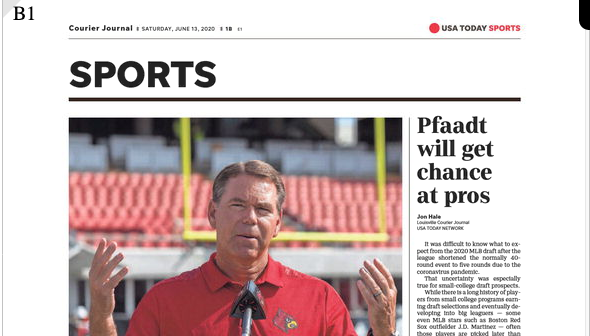 Before cell phones, social media and all things we have now to crank out whatever we think when ever we feel there was the daily newspapers. Families took time to read at the breakfast table or the evening edition in the family room. Together.

Newspapers are thin now and don’t carry near the weight they used to in any part of society. About the only way to get information about University of Louisville sports for decades was the Courier-Journal and Louisville Times.

The Courier-Journal, especially, is a mere shadow of its former self, losing much of its prestige and respect. That’s despite having recently been awarded a Pulitzer Prize for covering a travesty that dumped on their front porch. The Times, unfortunately, was put to bed for the final time in 1986.

Now you have a long list of sources you can tune into. The C-J, 790 WKRD, ESPN, Louisville Sports Report, Fox Sports, Bleacher Report, Cardinal Authority,  Card Chronicle, The Crunch Zone and Card Game, all dedicated to Cardinal Sports. I know I’m missing some, forgive me.

Most sites are dedicated to reporting only the positive of Louisville athletics and not the negative. At Card Game, I believe we report the good and the bad to the fan base. It seems as though our local newspaper loves to hammer the negative, one columnist in particular.

Tim Sullivan is a friend of mine. But it’s a sad situation when the lead columnist seems to be desperate for Internet clicks, pummeling the home team on every issue that emerges. He’s not doing himself or the Courier-Journal any favors at a time when the print media is already in danger of extinction.