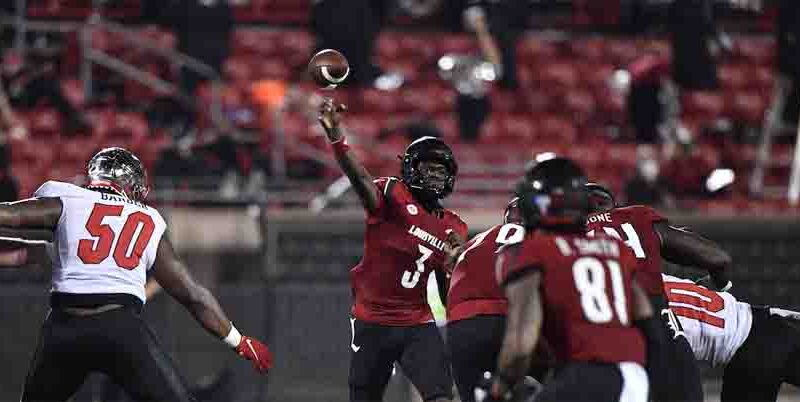 Never so happy to witness a University of Louisville game. That coming from someone who had been following UofL for six plus decades. This fan, this fan base, this community needed some real live college competition. The Cardinals answering the call, ringing in the 2020 college football season.

Micale Cunningham is the gift that keeps on giving, emerging from obscurity last season to earn the quarterback job after Puma Pass went down. Cunningham continuing to improve, orchestrating the 35-21 win over Western Kentucky University. Completing 19 of 35 passes for 343 yards and four touchdowns, rushing for 24 yards and another six points.

Cunningham’s cool, calm leadership never more evident with his team stuck on its on one-yard line, falling behind WKU early in the opening minutes. Finding Braden Smith streaking downfield for a 63-yard gain, setting up Erick Pfeiffer for a 28-yard touchdown completion on an ensuing play.

Smith finished with four catches for 110 yards, becoming the first Cardinal to record 100 receiving yards in his UofL debut since Deion Branch tallied 123 yards against Kentucky in the 2000 season opener.

There will never be a prettier pass or catch than the one Dez Fitzpatrick pulled from the waiting hands of WKU defender, completing a spectacular 63-yard touchdown play.

The kind of quarterback decision making that inspires confidence, switches the momentum, gets one back in the game, and immediately improves the outlook for the upcoming season.  “Cunningham did a lot of great things with his legs and his arm,” said Coach Scott Satterfield.

And how about that Louisville defense, aptly described as the worst in America two seasons ago? Not all that great last season. Holding Western Kentucky’s ground game to only 119 yards and allowing 129 passing yards.

“The guys came out and played well,” said Scott Satterfield. “Proud of them. The way things are today, you’re not guaranteed tomorrow.”

Mucho work needed on the punting game, with sophomore kicker Logan Lupo twice giving WKU the ball inside UofL’s five-yard line. The Hilltoppers quickly reciprocating each time, scoring on the very next play.

Slippery ball but questionable mechanics, making one apprehensive about encores during ACC competition. Good distance when he does get the kick out of there but nerve-wracking at best. May be time for some more kicker auditions. Time for some quick kicks? Status quo not acceptable.

ESPN putting Louisville football back in the national spotlight next week with a College GameDay appearance against the visiting Miami Hurricanes. “Nice to be back in the national spotlight again,”said Satterfield. “Can’t wait.” College GameDay first came to Louisville in 2016 when the Cardinals defeated second-ranked Florida State 63-20. The show returned the following year for the team’s game against Clemson.

One thought on “The wait is over, Cunningham and Louisville football are back”