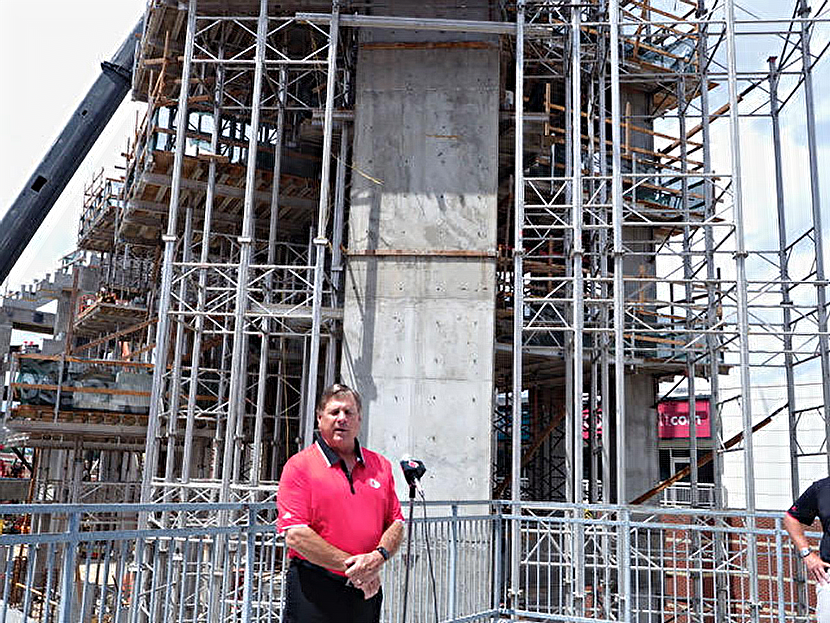 Still hard to believe for this long time University of Louisville football fan who dared to dream of UofL someday having its own facility while having his view partially obscured by a steel post at the fairgrounds.

But here we are again, back at Papa John’s Cardinal Stadium for an update on still another expansion. This one a luxurious state-of-the-art, 10,000-seat addition, which will complete the oval. Raising capacity to 65,000 seats, along with growing expectations for the UofL football program.

The construction towers over the north end zone, confirming that the latest addition will be the crown jewel, a striking tribute to college football in Louisville. “The magnitude of it is stunning,” said Tom Jurich, standing in front of the massive combination of wood, concrete and steel framework on Thursday.

The Vice President of Athletics confirmed that the project is on time and under budget and will be complete in time for the home opener in 2018.”I don’t think any college in the country can compete with this as far as the uniqueness of it,” he said.

It’s no secret that Tom has delegated most of the responsibility, including the fundraising and construction, of the stadium expansion to his son Mark Jurich, senior associate athletic director.

The younger Jurich said he is excited for UofL fans who will occupy the end zone expansion. “Our fans are going to be right on top, giving our players an atmosphere unlike anything they’ve experienced before,” he said.

“I’m excited to know they participated in this being built, buying seats, buying tickets to see this,” he said. “It is just the next step the football program and the university are taking together.”

These premium seats will have access to two premier gathering areas; the Pepsi Club, which will provide viewing access to the field, and another premium club, which will be similar to AT&T Stadium, the home of the Dallas Cowboys.

All of the concrete work is expected to be complete by this year’s home opener against Clemson on Saturday, Sept. 16th.  Serving notice to the Tigers and the rest of the college football world that the UofL football program intends to be a major player, now and in the future.