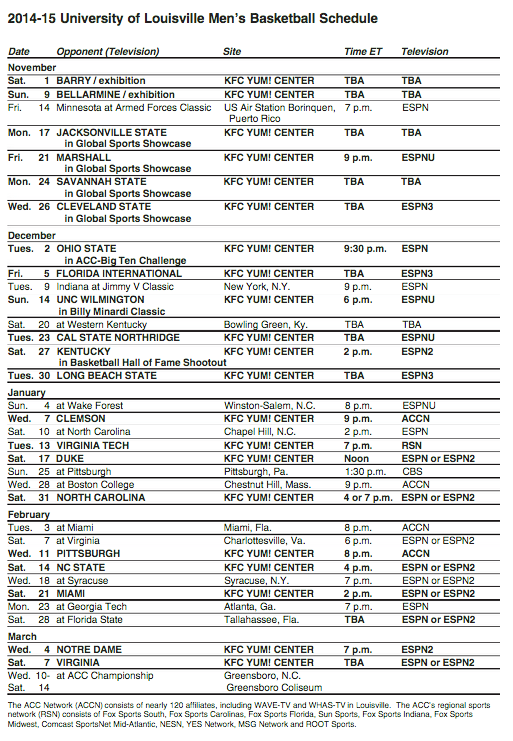 Right on schedule, five days before the opening kickoff of the football season, the 2014-15 University of Louisville basketball schedule has been released.

We keep hearing how it takes months to finalize the schedule but it always comes out the last week of August. This season’s release all but obscured in the excitement leading up to Monday’s football opener against Miami.

This town can’t wait for the football season to begin, some fans complaining that 2 p.m. is too late in the day to open the Green Lot for tailgating for an 8 p.m. kickoff.

A clear sign of just how far football has come in Louisville over the past decade.  UofL has won two BCS bowls and finished in the top 10 twice, sixth in the Associated Press poll in 2004 and 2006. The Cards were 19th in the 2005 poll and 13th after the 2013 campaign.

Not too many years ago, the new basketball schedule would have been a serious distraction. Thankfully, those days are history.

Regardless, the basketball schedule is probably the toughest in UofL’s rich history, featuring home games against Duke, North Carolina, Ohio State and Kentucky and a challenging father-son matchup against NIT champion Minnesota at a U.S. Air Force facility in Puerto Rico.  Eighteen games with Atlantic Coast Conference foes, including a February 18th showdown at Syracuse.