Such an impressive first half, the University of Louisville racing out to a 10-point lead at one point, hitting 52 percent of its shots, clinging to a five-point lead at the half, a great first impression in the heralded Atlantic Coast Conference basketball tournament.

The Cardinals leading by 10 points at one point, North Carolina just trying to keep it close. 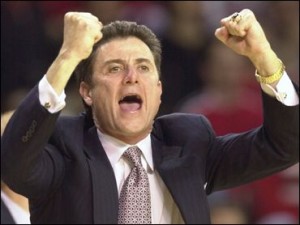 Turnovers on the first two possessions of the second half, however, are a harbinger of what lies ahead for UofL. A drop off in focus and intensity, a serious bump in momentum that will prove fatal in the 70-60 loss to North Carolina.

One of the turnovers a pass from Terry Rozier bouncing off the hands of Chinanu Onuaku, not expecting the ball, leading to a 3-pointer by UNC’s Justin Jackson. The other a gift from Quentin Snider to Brice Johnson leading a slam, tying the game at 37-37.

A chess match the rest of the half, the dreaded shooting slump rearing its ugly head again.

Looking for quick fixes, the wrong guys taking the wrong shots, benefiting and prolonging the North Carolina zone. The Cardinals could manage only eight of 36 shots in the final 20 minutes, missing 15 of their last 17 shots. Of those eight baskets, three of them were dunks by Montrezl Harrell.

It’s a shame Terry Rozier will have had only the equivalent of one full season at UofL when he enters the NBA draft this spring. One of the better all-around players during Rick Pitino’s tenure, he has enormous potential, inspiring confidence every time he gets the ball.

Rozier would lead UofL with 20 points, but he needed 20 attempts to get those points, connecting on only six shot attempts.

One more season would have greatly benefitted Terry and Louisville basketball. Would have been fun to watch him grow and mature. But that’s college basketball these days, so dimished by the NBA influence, lacking some of the important elements that made the sport so popular for decades.

Rick Pitino clearly angry following the game, lashing out at a student reporter from the Louisville Cardinal, the school newspaper, and only answering a couple of other questions before departing the press conference. He followed that up by sending out an assistant coach for the post-game radio interview.

A lesson learned for a would-be sportwriter: Never be the first person to ask Pitino a question after a loss.

One of the disadvantages of losing early is that the players will have five or six more grueling practice sessions under the scathing eyes of Pitino. Practices are challenging enough when they’re winning. They’re off the chart after losses.